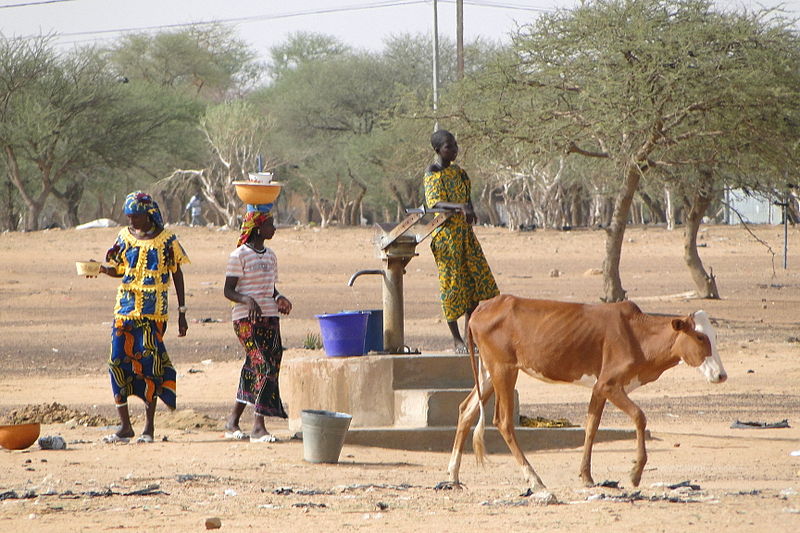 A scene at a village well in Dori, in the Sahel region of Burkina Faso, which holds elections on November 22 amid a security crisis. Photo credit: Wikimedia/Adam Jones, PhD (CC BY-SA 3.0)

Burkina Faso is scheduled to hold presidential and parliamentary elections on November 22, 2020. These elections are taking place in the context of a growing security crisis as well as political uncertainty as the country’s democrats seek to consolidate the young, fragile democracy. More

Ghana is scheduled to hold presidential and parliamentary elections on December 7, 2020. Ghana is often cited as a success story for democratic transition. In that vein, the two main political parties, the center-right New Patriotic Party (NPP) and center-left National Democratic Congress (NDC), have alternated stints in power since Ghana began holding multiparty elections. The presidential election will be a rematch between incumbent Nana Akufo-Addo from NPP and former president John Mahama from NDC – the third consecutive face-off between Akufo-Addo and Mahama. More

Niger’s constitution bars incumbent Mahamadou Issoufou from running for a third presidential term, and in that vein, he is standing down (in contrast to Alpha Condé of Guinea, his friend and longtime colleague in the Francophone socialist movement, who recently changed his country’s constitution in order to pave the way to a third term). His party has nominated interior minister Mohamed Bazoum to be its presidential candidate. However, the constitutional court has barred opposition leader Hama Amadou from running. More

The Central African Republic (CAR) has scheduled presidential and legislative elections for December 27, 2020. The upcoming elections are taking place in the context of a humanitarian crisis and a crisis of governance. The country has had multiparty elections since 1993, but a series of coups and instability have prevented democracy from flourishing. Meanwhile, Russia is heavily involved in the country’s politics. More

Claire Wilmot, Washington Post (November 17, 2020): Ethiopia’s cracking down in Tigray. But activists are spreading the news.

Angola is due to hold its first-ever local elections in 2020. However, the elections have already been delayed multiple times (most recently in September 2020), and no date has been set. Meanwhile, COVID-19 provides an excuse for additional delays. In short, it is unclear when – or whether – the local elections will actually happen. Moreover, the country has never held free elections, and the People’s Movement for the Liberation of Angola (MPLA), a former armed group, has ruled since independence in 1976.

On October 24, Angolans protested against – among other things – the delay of the local elections. Another protest is planned for November 11, 2020 – Angola’s independence day. More

Osvaldo Silva, openDemocracy (November 14, 2020): What happened to democracy in Angola?

Otieno Joel. The East African (November 16, 2020): Why Somali polls are critical for the country and Horn of Africa

President Idriss Déby seized power in a rebellion in 1990, and although the country holds elections, there has never been a change in power by a free or fair vote. However, the opposition does hold seats in the National Assembly. Chad is one of the poorest countries in the world, and its economy depends on oil, meaning it will be hit particularly hard by the global slump in oil prices. More

Self appointed Marshal Idriss Deby of Tchad has announced he will run for a 7th term in April 2021. pic.twitter.com/N7LXdJZj6F

Benin is due to hold a presidential election in March 2021. Incumbent Patrice Talon will likely run for a second term, and he could be the only candidate on the ballot. Previously a model democracy in the region,  Benin has seen democratic decline since Talon’s election in 2016. More

The Economist (November 14, 2020): Zambia is starting to look like Zimbabwe, the failure next door

South Africa Local Elections: Between August 3 and November 3, 2021 (due)

South Africa is due to hold local elections between August 3 and November 3, 2021. Voters will elect councils for all municipalities in each of the country’s nine provinces. South Africa, dubbed the “Rainbow Nation” by Archbishop Desmond Tutu, inspired the world with its nonviolent transition from apartheid in 1994. The election that year was South Africa’s first that included all races. Since the end of apartheid and the subsequent victory of Nobel Peace Prize laureate Nelson Mandela, the African National Congress (ANC) has been South Africa’s dominant political party, winning every election since then. More

Dirk Kotze, The Conversation (November 18, 2020): What by-elections in South Africa say about the ruling party and the state of opposition

Cote d’Ivoire held a presidential election on October 31, 2020 in the context of rising political tensions as President Alassane Ouattara sought and won a controversial third term while using the state to bar his political opponents from running against him. More

Tanzania held presidential and legislative elections on October 25, 2020. While the country has historically been a beacon of stability, President John Magufuli has overseen a slide into authoritarianism. After the elections, the government ramped up its assault on the opposition. More

Nicodemus Minde, The Conversation (November 15, 2020): How Magufuli has steered Tanzania down the road of an authoritarian one-party state

Amid violence, Guinea held a presidential election on October 18, 2020. Incumbent Alpha Condé ran for a controversial third term, and for the third time, faced off against opposition leader Cellou Dalein Diallo. Both candidates claimed they won, but election officials declared Condé the winner. However, Diallo is challenged the results, alleging fraud and prompting street protests leading to at least 10 deaths. More violence is likely. More

The DRC’s December 2018 presidential and legislative elections, which took place after multiple delays, were mired in controversy and dispute. The election commission declared opposition leader Félix Tshisekedi the winner of the presidential poll, but the Catholic Church, which deployed 40,000 election observers and is a highly trusted institution in the country, said that their data indicated a victory for another opposition leader, Martin Fayulu. When Kabila’s chosen successor, Emmanuel Ramazani Shadary, was polling too poorly for Kabila to credibly rig the election for him, Kabila cut a deal with Tshisekedi. The legislative elections – also highly disputed – produced a majority for Kabila’s coalition. Major opposition figures Moïse Katumbi and Jean-Pierre Bemba were barred from the polls and spent the election cycle outside the country, but both have returned. The opposition holds that Kabila is still in control.

Nigeria intends to build a new museum over the next four years that could exhibit looted Benin bronzes currently displayed in European and American museums, officials sayhttps://t.co/6uI1jTvIUo