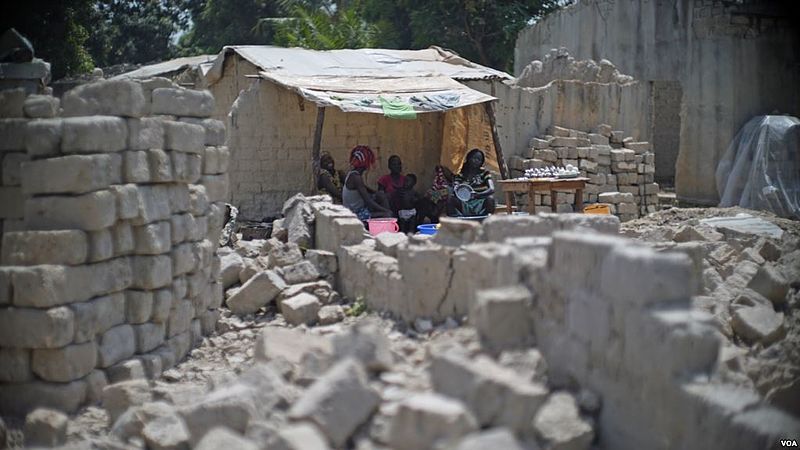 Elections in the Central African Republic are taking place in the context of a political and humanitarian crisis. Refugees shelter under tarps as they seek to rebuild their home in Bangui, the capital, in 2017. Photo credit: VOA/Z. Baddorf (public domain)

Meanwhile, local elections – which have not taken place in the Central African Republic since 1988 – are also due in 2020/2021, although it is far from clear when or whether they will happen.

These elections are taking place in the context of a humanitarian crisis and a crisis of governance. The country has had multiparty elections since 1993, but a series of coups and instability have prevented democracy from flourishing.

Sectarian clashes have been taking place since 2013, when Seleka (“alliance” in Sango, a local language) Muslim insurgents forced President François Bozizé (who himself had seized power in a 2003 coup) from office and installed Michel Djotodia, a Muslim and a northerner. Because CAR is more than 80 percent Christian and animist and about 10-15 percent Muslim, southern Christians had held the presidency since independence from France in 1960. Therefore, having a Muslim president caused some controversy. In response, southern Christian militias called “anti-Balaka” (“invincible” in Sango) clashed with the government and attacked civilians.

Following the collapse of Djotodia’s presidency less than a year after it began, a UN-backed transitional government under Catherine Samba-Panza subsequently took over until the 2015-2016 presidential election. After a first round with 30 candidates, former prime minister and mathematics professor Faustin-Archange Touadéra (sometimes called FAT) won runoff against another former prime minister, Anicet-Georges Dologuélé.

Dologuélé conceded and urged his supporters to accept the results peacefully. The African Union judged the election to be generally successful despite irregularities and allegations of fraud. On the other hand, the concurrent legislative elections were annulled and subsequently re-run in early 2016 due to fraud.

A 2017 peace agreement between the government and all but one of the armed militias did little to stop the violence. Fighting continues despite a new agreement signed in February 2019 that gave government roles to some of the insurgent leaders. In the same vein, the government has extremely limited – if any – power outside Bangui, the capital. Consequently, violence could break out again around the elections. Moreover, civilians continue to face attacks from various armed groups.

Political parties in Central African Republic are weak – a large chunk of the National Assembly members are independents and the parties that do function tend to be vehicles for specific politicians rather than ideologies. Opposition party activists – and journalists who write about them – face intimidation.

Touadéra ran for re-election, facing a total of 21 challengers. He won in the first round, with 53.9 percent of the vote. Former prime minister Dologuélé, who launched and now heads new coalition of opposition parties called Coalition de l’Opposition Démocratique 2020 (COD-2020), placed second, with 21 percent of the vote.

However, ahead of the elections, the country’s constitutional court disqualified former president Bozizé from running. Bozizé had returned to the country in December 2019 after six years abroad, but he faces an international arrest warrant for crimes against humanity in addition to UN Security Council sanctions due to his support of anti-Balaka attacks. As a result of Bozizé’s disqualification, tensions shot up. Bozizé joined the rebel alliance Coalition of Patriots for Change (CPC), which ironically includes some of the Séléka groups that ousted him from office in 2013. CPC subsequently seized towns around Bangui, which led to numerous civilian deaths and exacerbated the ongoing refugee crisis.

Although Bozizé sought to force an election delay, the polls did take place on December 27 in some areas. However, turnout was only 35 percent. Consequently, the opposition urged a re-run. However, courts upheld the results. Tensions have continued to escalate since the polls, and the country is currently in a state of emergency.

Following Touadéra’s ascent to the presidency, France withdrew its peacekeeping force, which had been in the country since 2013. As a result, Russia has ramped up its political and military involvement in exchange for mining rights. Last year, three Russian journalists from a newspaper critical of the Kremlin were killed in the country while they were investigating the role of the Wagner Group, a Russian military contractor, in exploiting the CAR’s mineral wealth. A former Russian intelligence officer is Touadéra’s national security advisor, and the Wagner Group handles Touadéra’s personal security detail.

Samuel Ramani, in a piece for RUSI, notes: “As the CAR civil war passes its eighth anniversary, Russia has emerged as the leading external military and diplomatic stakeholder in the country. Since Touadéra’s short-term position is secure, Russia will seek to counter French power projection displays, such as its 24 December flyover mission, and work with the African Union on a more comprehensive peace settlement. With the international community focused on other challenges – such as extremism in the Sahel, Al-Shabaab’s resurgence in Somalia and the Libyan civil war – Russia’s hegemony in CAR could quietly consolidate in 2021.”

These arrangements have drawn criticism from opposition figures such as former National Assembly president Karim Meckassoua and groups such as É Zingo Biani – a coalition of opposition politicians and civil society activists.

John A. Lechner and Alexandra Lamarche, Foreign Policy (January 22, 2021): Outside Powers Are Making the Conflict in the Central African Republic Worse

RFI (November 9, 2020 – in French): Elections in the Central African Republic: “I will not be a candidate” declares Michel Djotodia

AFP (September 18, 2020 – in French): Uncertainties about the presidential election at the end of December in the Central African Republic