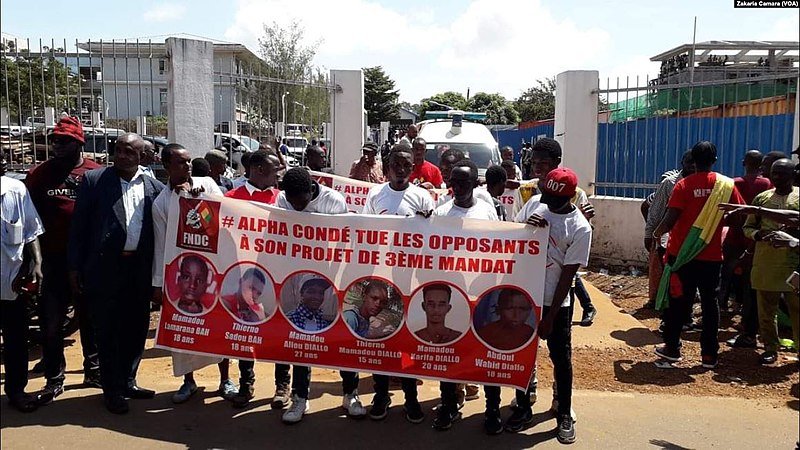 Members of the National Front for the Defence of the Constitution (FNDC), a coalition that opposes to a constitutional change to allow Condé to run for a third term, at a funeral march following a violent crackdown on anti-government protests. Photo credit: VOA/Zakaria Camara (Public Domain)

Amid violence, Guinea held a presidential election on October 18, 2020. Incumbent Alpha Condé ran for a controversial third term, and for the third time, faced off against opposition leader Cellou Dalein Diallo. Both candidates claim they won, but election officials declared Condé the winner.

Guinea’s politics are playing out in an environment of increased polarization and political violence.

Elections in Guinea routinely see significant delays, ethnic tensions, and violence. The country has a history of coups. Historically, the security forces have used excessive force to quell protests.

Guinea’s two biggest political parties are the Condé’s Rally of the Guinean People (RPG) and the main opposition Union of Democratic Forces of Guinea (UFDG), led by Diallo. Diallo narrowly lost the presidency to Condé in 2010, considered to be Guinea’s first credible election, following a transition from military to civilian rule.

The country has a total of 130 registered political parties, many of which are based on ethnicity (Guinea has over 20 ethnic groups) and personality rather than ideology. RPG and UFDG are bitter rivals . While the parties both claim to be multiethnic, Condé’s RPG gets most of its support from Malinke people, and the UFDG mostly gets support from Fulani people.

Condé has described the presidential election as a “war,” and has given speeches in the Malinke language, which some see as stoking ethnic tensions as it has been the custom to give national addresses in French. Meanwhile, the opposition has accused Condé of being a dictator.

The 2020 Elections in Guinea and Condé’s Pyrrhic Victories

In 2020, Condé sought third term following his victory in a 2020 constitutional referendum. The result opened the door for Condé to run again (which Russia encouraged because Russian companies have mining interests in Guinea), the logic being that a new constitution means a new republic, which means a reset on term limits. The new constitution was controversial – opposition protests beginning in October 2019 over the proposed change left at least 31 people dead, and protests on voting day left at least 10 people dead.

Condé’s RPG appears to be on a roll, with dual victories in March 2020. In the legislative elections, which the opposition boycotted, RPG won 79 of the 114 seats in the National Assembly. Furthermore, Condé won a referendum that would allow him to seek a third term.

However, as Kabinet Fofana and Joschka Philipps noted in April 2020: “In Guinea, the referendum has resuscitated an amalgam of political, inter-ethnic and religious conflicts. These can be contained, but initially appear worryingly similar to the communitarian violence that shook the region in 2013.”

While there were 11 candidates for president in 2020, the election was primarily a contest between Condé and Diallo. The official result was 60 percent for Condé and 33 percent for Diallo. However, Diallo challenged the results, alleging fraud and prompting street protests leading to at least 10 deaths. The government arrested a number of opposition members following the election.

Guinea’s political future remains uncertain, but regional and international bodies, as well as Guinean civil society and political groups, have urged elections. Doumbouya has promised elections and a return to civilian rule, but has not committed to a timetable.

Although Guinea is one of the world’s poorest countries, it has mineral wealth. It is one of the world’s biggest producers of bauxite (a key ingredient in aluminum). Much of the bauxite is exported to China, which loaned Guinea $20 billion in exchange for bauxite concessions. Guinea also has iron, gold, diamonds, and oil.

During the Cold War, Guinea initially aligned with the Soviet Union following independence from France, but became site of geopolitical competition and vacillated between Moscow and the west. As Russia beefs up its political and military involvement in Africa, it has its eye on Guinea, supporting Condé’s bid to change the constitution. In  that vein, in several African countries, Russia has sent mercenaries along with “political technologists” to help incumbents rig elections in exchange for mining concessions.

The Africa Report (September 22, 2021): Guinea: Can Doumbouya lead the country in a peaceful transition?

Kabinet Fofana and Joschka Philipps, African Arguments (April 16, 2020): Guinea’s elections had a clear winner. But its contest for power isn’t over.

The Economist (October 21, 2019): The Kremlin is encouraging Guinea’s president to ditch the constitution. The Guinean people aren’t thrilled.

← Slovakia Parliamentary Elections: February 29, 2020
Tajikistan Presidential Election: November 2020 (due) →
By continuing to browse the site you are agreeing to our use of cookies.
Share This