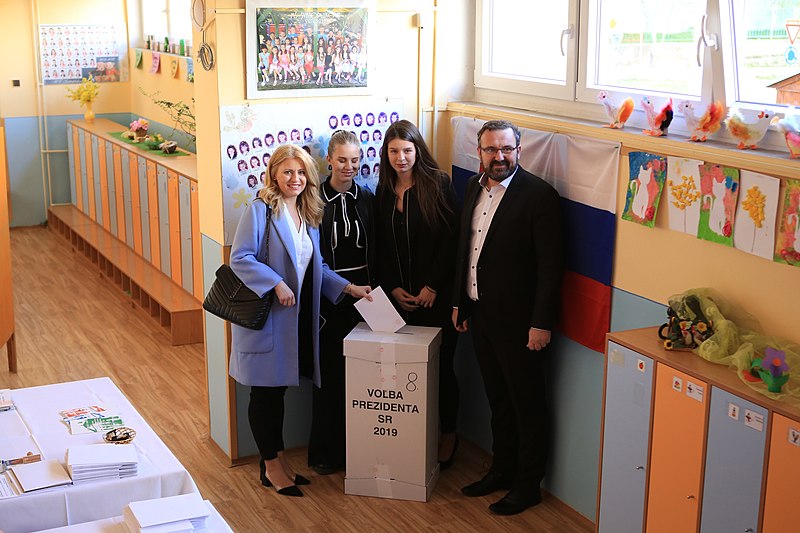 Zuzana Čaputová casts her ballot in the second round of 2019 Slovak presidential election, which she ultimately won. Photo credit: Wikimedia/Slavomír Frešo (CC BY-SA 4.0)

Slovakia’s politics could be headed for a change following the murder nearly two years ago of journalist Jan Kuciak, who was investigating the ties between the ruling left-wing populist Smer-SD party and organized crime.

In June 2019, Zuzana Čaputová, a co-founder of the liberal pro-European Progressive Slovakia (established in 2017 and thus not yet represented in parliament), defeated her populist-backed opponent by a landslide to become Slovakia’s first female president. She ran on a platform of anti-corruption and stemming the rising tide of populism and nationalism. Former president Andrej Kiska in June 2019 launched a new political party to take on the ruling left-wing populist Smer-SD (Direction Social Democracy), which holds 48 seats in parliament and governs in coalition with the right-wing populist Slovak National Party (SNS) and center-right Most–Híd (Bridge). Kiska’s new party is projected enter parliament.

The rise of the neo-Nazi People’s Party-Our Slovakia (LSNS) – currently polling in second place – has troubled many, but the party will probably not get anywhere near government. Other parties consider it toxic and will not include it in their coalitions.

Slovakia was part of Czechoslovakia until the 1993 “velvet divorce.” Slovakia joined both NATO and the European Union in 2004.

Miroslava German Sirotnikova and Marc Santora, New York Times (March 1, 2020): ‘Slovakia Has Woken Up’: Governing Party Suffers Decisive Election Defeat: The loss paves the way for a new governing coalition after the main opposition group ran a campaign under the slogan “Together Against the Mafia.”

BBC (March 1, 2020): The opposition Ordinary People party (OLaNO) has won a resounding victory in Slovakia’s parliamentary election on a wave of anti-corruption sentiment.

← Suriname
Guinea Presidential Election: October 18, 2020 →
By continuing to browse the site you are agreeing to our use of cookies.
Share This