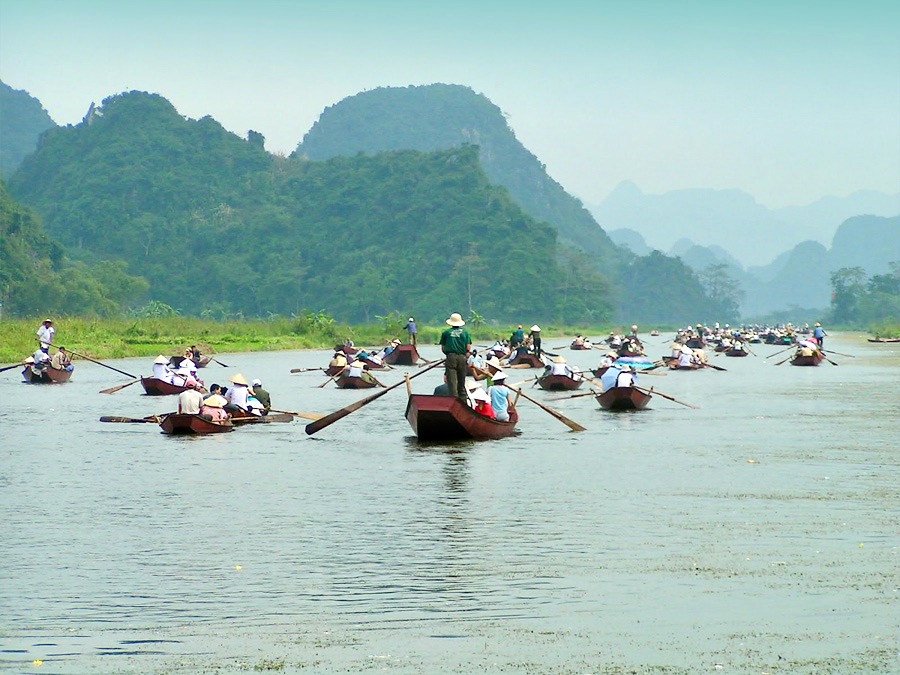 Pilgrim boats en route to the Perfume Pagoda near Hanoi, Vietnam. Vietnam heads to the polls this month, although the country is a one-party Communist state and voters lack real choice. Photo credit: Wikimedia/Tango7174 (CC BY-SA 4.0)

Samoa is to hear on Monday whether fresh elections will go ahead next week.https://t.co/zaoCQY7mbZ

Fiona Ey, The Guardian (May 13, 2021): Samoa is experiencing a bloodless coup. The Pacific’s most stable democracy is in trouble

Radio New Zealand (May 13, 2021): Samoan prime minister claims to be ‘appointed by God’

Mongolia, a free though imperfect democracy, has scheduled its presidential election for June 9, 2021, following parliamentary elections in June 2020 and local elections in October 2020. However, concerns have recently been raised about freedom and democracy. More

Kawashima Shin, The Diplomat (May 13, 2021): Why Is Japan Hesitant to Improve Relations with South Korea?

Eric Johnston, Japan Times (May 9, 2021): Abe rallies conservative base amid speculation over comeback

The leader of #HongKong's biggest opposition party says they have reached a watershed moment & it will take a lot of soul-searching to reach the right decision. @ChauCandice #China https://t.co/XkZTB9FiTW

The Economist (May 15, 2021): South Korea is pushing America for new talks with the North

"South Korea’s presidential race kicked off Sunday with an announcement from 2 term lawmaker Park Yong-jin that he intended to run for president in next year’s election, while heavyweights geared up for the election by rallying supporters."@TheKoreaHeraldhttps://t.co/icEx0Jo91g

Malaysia’s Prime Minister Muhyiddin Yassin has indicated that he will call early general elections once the COVID-19 pandemic is over. Meanwhile, several of Malaysia’s states are due to hold elections in the next year. The country’s politics have been turbulent since the historic defeat of UMNO – which had ruled since 1957 – in the 2018 elections. UMNO is back in power but hanging on by a thread. More

Amy Chew, South China Morning Post (May 9, 2021): Can Malaysia’s DAP capture the Muslim and non-Chinese vote? Anthony Loke may be about to find out

Elections in four Indian states (West Bengal, Assam, Tamil Nadu, and Kerala) and one union territory (Puducherry) begin on March 27 and will conclude on May 2. These elections, involving 180 million voters, will be a key test for the national parties, but regional parties also play a big role. Meanwhile, India is experiencing a massive COVID-19 outbreak.

In West Bengal, a former communist stronghold that has been led by Mamata Banerjee from the center-left Trinamool Congress party – currently the only female Indian state leader – for the last 10 years, a massive campaign push from Narendra Modi‘s BJP did not lead to a win. Banerjee will remain chief minister and Trinamool Congress won two-thirds of the seats. However, BJP jumped from three seats to 77 in the 294 seat legislature.

In the other two states, incumbents remain in power. In Assam, BJP held its majority. In Kerala, the leftist coalition will remain. More

DW (May 13, 2021): Ex-Maldives president flies to Germany after bomb attack

Committee for the Protection of Journalists (May 13, 2021): Myanmar sentences Democratic Voice of Burma reporter Min Nyo to 3 years in prison for criminal mutiny

Ei Hlaing, The Conversation (May 12, 2021): Myanmar’s anti-coup protesters defy rigid gender roles – and subvert stereotypes about women to their advantage