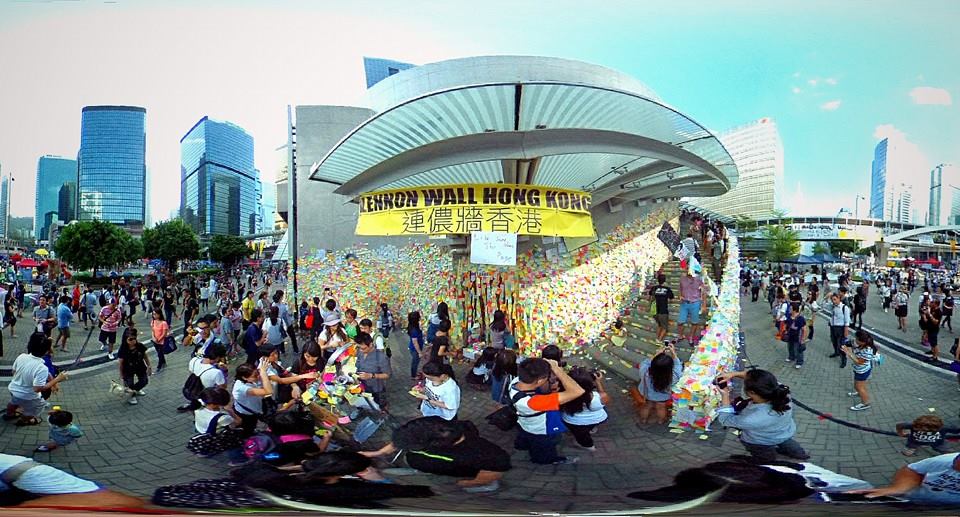 A pro-democracy Lennon Wall in Hong Kong in 2014. Since June 2019, protesters have been demonstrating for, among other things, free elections in Hong Kong – even in the face of a draconian new national security law. Photo credit: Wikimedia/Thony Lam (CC BY-SA 3.0)

These elections are taking place in the context of Beijing consolidating its power over Hong Kong and a draconian new security law that authorities have used to crush Hong Kong’s pro-democracy movement and criminalize dissent. The NGO Human Rights Watch calls the law “Beijing’s most aggressive assault on Hong Kong people’s freedoms since the transfer of sovereignty in 1997.” Hong Kong was supposed to be governed under the principle of “one country, two systems” until 2047 – fifty years after the handover from Britain to China – but China has effectively reneged on its commitment to that principle.

China imposed the security law in response to series of massive protests – with as many as 2 million people in the streets on at least one occasion – that began in June 2019. The proximate cause was a controversial extradition bill, but even though the bill was withdrawn, protesters persisted, calling for more democracy and free elections. China, unable to tolerate dissent, imposed the law on June 30, 2020, and waged a brutal crackdown on the freedoms of the people of Hong Kong.

Following the 2015 District Council elections, the pro-Beijing camp controlled all 18 councils, but the pro-democracy and localist camps held less than 30 percent of the seats. However, in the 2019 District Council elections, the pro-democracy camp won in a landslide: majorities in 17 out of the 18 councils, and nearly 90 percent of the seats on the councils. Furthermore, turnout was 70 percent, compared to 45 percent in 2015.

To that end, in July, just over a week after China’s new security law took effect, the pro-democracy camp held an unofficial primary in which 600,000 people voted. The purpose of the primary was to choose the strongest candidates and prevent a split in the pro-democracy vote. However, China declared the primaries illegal, and threatened to prosecute those involved. Additionally, Carrie Lam also said that the primaries might have violated the new security law.

Meanwhile, officials have banned a number of prominent pro-democracy politicians from running for seats in the Legco, and arrested activists. Although most Hong Kong residents oppose the security law, publicly objecting it is grounds for disqualification for public office, according to officials. Therefore, a number of pro-democracy groups have disbanded and ceased operations.

Moreover, China is further changing Hong Kong’s election rules to make sure that only “patriots” – as defined by the Chinese Communist Party – are able to run for office. In that vein, The Economist has downgraded Hong Kong from “flawed democracy” to “hybrid regime.” In short, democracy is in dire straits in Hong Kong.

China’s aggression in Hong Kong has impacted the way people around the world view China’s ambitions. In particular, it has resulted in more pro-independence sentiment in Taiwan. Moreover, a Pew Research Center survey found historically high unfavorable views of China around the world.

Jen Kirby, Vox (January 26, 2021): A pro-democracy activist on Hong Kong’s year of turmoil: “The city itself is dying”

Mary Hui, Quartz (July 13, 2020): Over half a million Hong Kongers are potentially guilty of breaking the national security law

← Burma General Elections: November 8, 2020
Indonesia Provincial and Local Elections: December 9, 2020 →
By continuing to browse the site you are agreeing to our use of cookies.
Share This