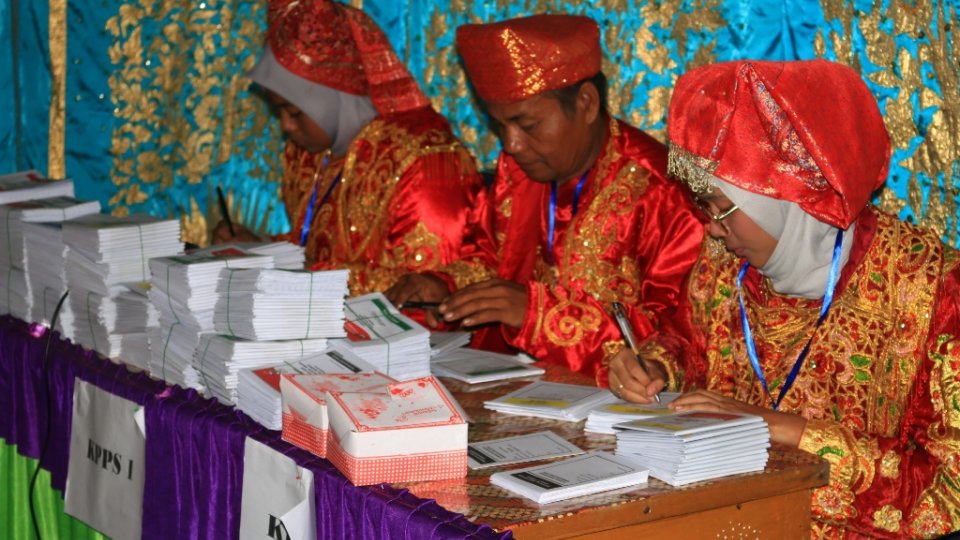 Poll workers in West Sumatra during the 2019 elections in Indonesia. The workers are wearing Minang wedding clothes, saying they did so in order to attract attention and increase voter turnout. Photo credit: Wikimedia/City government of Pariaman (public domain).

Indonesia will hold local and provincial elections on December 9, 2020. In these elections, Indonesians will elect governors in nine of Indonesia’s 34 provinces (West Sumatra, Jambi, Bengkulu, Riau Islands, Central Kalimantan, South Kalimantan, North Kalimantan, North Sulawesi, and Southeast Sulawesi), plus regents in 224 districts, mayors in 37 cities and 32 provinces across Indonesia. There are more than 100 million eligible voters.

Some have called for these elections to be postponed due to COVID-19, but the government has said that they will proceed on schedule.

In Indonesia’s April 2019 election – the biggest single day of voting in the history of the world – incumbent Joko Widodo (Jokowi), widely seen as a reformer, defeated challenged Prabowo Subianto for the presidency in an election deemed free and fair by the international community. However, Prabowo didn’t accept the results, and in addition to challenging them in court, he urged his supporters to take to the streets. Rioting subsequently ensued. Prabowo ultimately accepted the results, but tensions remain, particularly regarding the role of religion in politics.

Ben Bland at the Financial Times sums up Indonesia – and Jokowi’s presidency – as follows: “Jokowi’s presidency is not just a story of personal paradoxes. He is struggling with the fundamental contradictions of the sprawling, diverse Indonesian nation, which was forged in a hurry 75 years ago from the arbitrary limits of Dutch colonial expansion. Like Indonesia, Jokowi is caught between democracy and authoritarianism, Islam and pluralism, openness and protectionism.”

← Hong Kong Legislative Elections: September 5, 2021
India: Five state elections in 2021 →
By continuing to browse the site you are agreeing to our use of cookies.
Share This