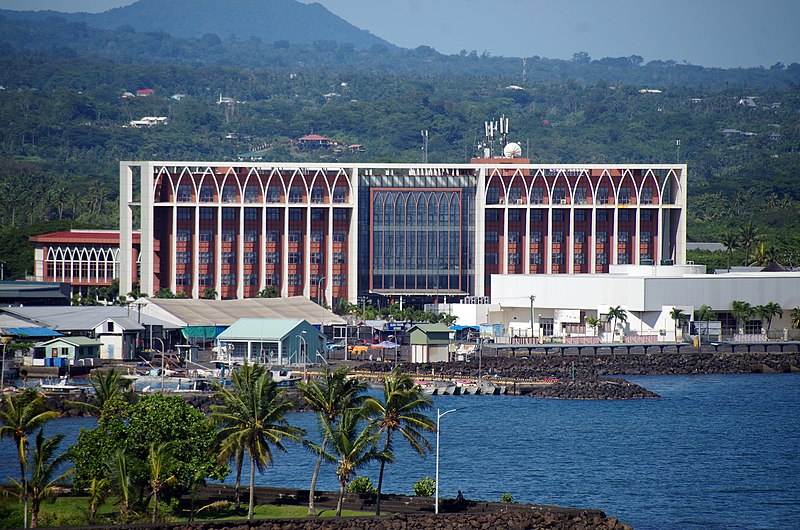 The government building in Apia, Samoa’s capital, and the site of controversy ahead of the April 2021 elections in Samoa. Photo credit: Wikimedia/Balou46 (CC BY-SA 4.0)

Samoa will hold general elections on April 9, 2021. Voters will elect members of the Fono (Legislative Assembly).

Samoa (not to be confused with American Samoa) consists of two main islands and several smaller islands in the western Pacific. It has been a parliamentary republic since independence in 1962.

Although elections in Samoa are generally considered free and fair, the Human Rights Protection Party (HRPP) has been in power since 1982, and Tuilaepa Sailele Malielegaoi has been prime minister since 1998. HRPP holds nearly all of the seats in the Fono, and is the only recognized party because no other party has the required eight seats to be recognized.

These elections are happening in the context of controversy over proposed changes to the county’s constitutional framework and judiciary. The changes involve questions of Samoan identity; as Anna Dziedzic at the Lowy Institute notes: “At the heart of the debate are questions about the authorship and ownership of the Constitution, and whether it can express Samoan custom or, in Prime Minister Tuilaepa Aiono Sailele Malielegaoi’s words, only palagi or foreign thinking.”

For background: In March 2020, the government introduced a series of bills that would basically create a second, parallel judicial branch based on Samoan customs and give more power to traditional village councils and chiefs.

Opponents argue that the changes would jeopardize constitutional protections for individual rights, and make way for village chiefs to act like despots. Moreover, the bills haven’t gone through the usual process of public scrutiny – the government claims this is due to COVID-19. Both Samoan and international NGOs have urged the government to withdraw the bills. Moreover, Deputy Prime Minister Fiame Naomi Mata’afa publicly opposed the bills and subsequently resigned from HRPP. Furthermore, she has urged Samoans to vote for new leadership in the upcoming elections – or at least to vote in a viable parliamentary opposition.

A New Opposition Coalition to Contest the 2021 Elections in Samoa

Meanwhile, a new opposition party called Fa’atuatua i le Atua Samoa ua Tasi (FAST, “Faith in the one true God”) will run in the elections. Former deputy PM Fiame Naomi Mata’afa supports it. The party has reportedly been raising a lot of money from the Samoan diaspora. While it is far from clear what will happen, this constitutes a significant challenge to HRPP’s longstanding grip on the country.

Similar to other Pacific nations, China has sought to ramp up its presence and influence in Samoa. This increased presence poses risks for democracies in the region.

Tahlea Aualiitia and Toby Mann, ABC (Australia) (February 13, 2021): Samoa’s Government may be facing the biggest challenge to its rule in 40 years at April’s election

← Micronesia Parliamentary Elections: March 2, 2021
Thailand Municipal Elections: March 28, 2021 (other local elections to follow) →
By continuing to browse the site you are agreeing to our use of cookies.
Share This