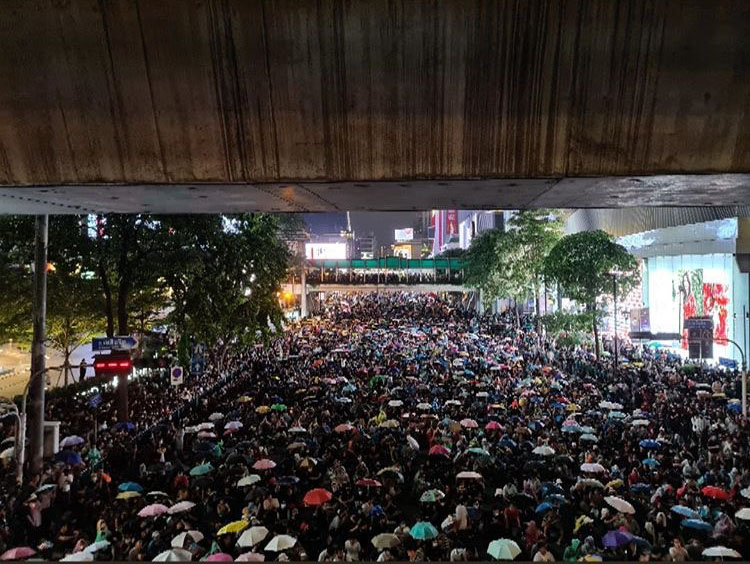 Protests in Bangkok on October 15, 2020. Protesters are calling for reform of the monarchy and fresh elections in Thailand. Photo credit: Wikimedia/Milktea2020 (CC BY-SA 4.0)

Thailand’s March 24, 2019 parliamentary election nominally returned the country to civilian rule following a military coup in 2014. However, the country remains deeply polarized. Scholar Janjira Sombatpoonsiri characterizes Thailand’s polarization as follows: “The royal nationalist worldview regards the Thai king as the country’s legitimate ruler; the competing democratic outlook contends that sovereignty resides with the Thai people….Relentless political conflict has split Thai society down the middle, undermining social cohesion and fueling tensions even in moments of crisis like the coronavirus pandemic.”

The upcoming local elections are taking place in the context of unprecedented protests against the monarchy, and calls for unprecedented types of reforms. These protests have been going on for months.

For background: The main political fault line during the elections was between pro- and anti-junta political parties. For two decades, the (sometimes violent) fight between controversial former prime minister Thaksin Shinawatra – who was ousted from office and convicted of corruption and is now living in exile – on the one hand and the military on the other hand dominated Thai politics. Thaksin’s populist Pheu Thai party won the most seats (136 out of 500).

Meanwhile, a new party, the progressive Future Forward Party (FFP), founded by billionaire Thanathorn Juangroongruangkit, captured the imagination of many of Thailand’s younger voters. It had originally been formed to give voters an alternative to the “red shirts” and “yellow shirts” – the feud between Thaksin’s mostly rural supporters and his opponents – a coalition of royalists and middle class urbanite. But Pheu Thai’s negotiations with FPP fell through.

The military still wields considerable power behind the scenes. Nonetheless, following the elections, Freedom House improved Thailand’s rating from Not Free to Partly Free, citing “a slight reduction in restrictions on assembly and tightly controlled elections that, despite significant flaws, ended a period of direct rule by military commanders.”

The 2020 Protests in Thailand

In 2020, Thailand’s Constitution Court dissolved the Future Forward Party. That act kicked off a series of protests, beginning on university campuses but ultimately spreading, and ultimately involving tens of thousands of Thais. Protesters are calling for fresh elections and a reform of the monarchy – previously a taboo in Thailand, which has strict lèse majesté laws.

The fact that the current king, Maha Vajiralongkorn, is both decadent and power-hungry has exacerbated the calls for reform. His father, King Bhumibol Adulyadej, who died in 2016, was beloved in Thailand and abroad. However, Vajiralongkorn has been compared to the notoriously cruel and incompetent Roman emperor Caligula.

The Upcoming Local Elections in Thailand

Future Forward Party has reconstituted itself as the Progressive Party, and plans to contest the upcoming local elections.

Thailand is a long-standing United States ally. During the Cold War, each saw the other as an important bulwark against Chinese and Vietnamese aggression. However, the two countries are growing father apart as each country’s view of existential threats evolves.

Randy Thanthong-Knight, Bloomberg (October 15, 2020): Why Protesters Are Back on the Streets in Thailand

Dave Lawler, Axios (October 1, 2020): Thailand’s taboo-smashing protests: “No one knows where the limit is”

Charlie Campbell, Time (September 14, 2020): ‘Thailand’s Inconvenient Truth.’ Why This Billionaire Is Risking It All to Back Reform of the Monarchy

← Samoa Parliamentary Elections: April 9, 2021
Vietnam Legislative Elections: May 23, 2021 →
By continuing to browse the site you are agreeing to our use of cookies.
Share This