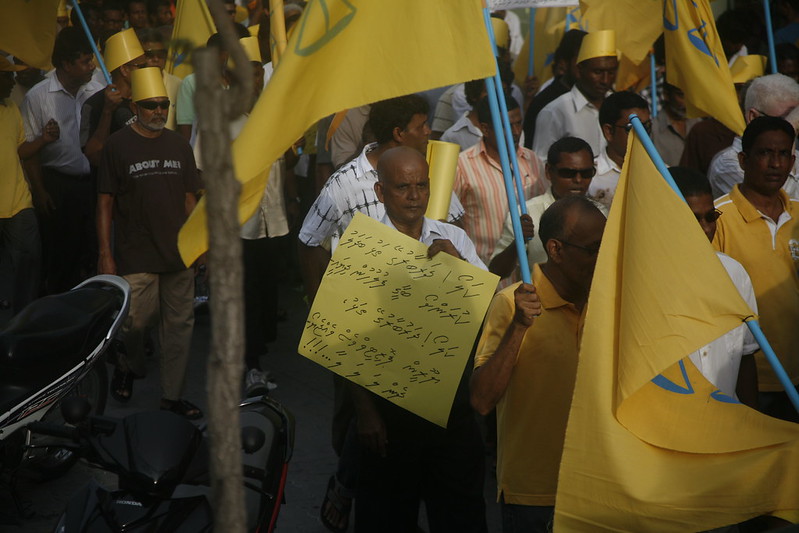 Maldives has scheduled local elections for April 10, 2021, following a delay due to COVID-19. Voters will elect island, atoll, and city councils to three-year terms.

Maldives, an idyllic Indian Ocean archipelago usually associated with honeymoons and oligarchs, lived under a brutal dictatorship for decades.

However, the country had a remarkable transition to democracy in 2008, in which the Maldivian Democratic Party (MDP), led by Mohamed Nasheed (widely known by his nickname, Anni), removed Maumoon Abdul Gayoom, who had ruled with an iron first for 30 years, peacefully, via the ballot box.

Subsequently, several setbacks followed. Nasheed resigned from office – reportedly at gunpoint – in 2012. After that, in the 2013 elections, Gayoom’s brother half-brother Abdulla Yameen defeated Nasheed in presidential election on a populist platform of nationalism and Islamic identity. Nasheed was jailed and spent some time in exile.

Officials then prevented Nasheed from contesting the 2018 presidential election, which everyone expected the PPM town. However, in a result that surprised everyone, MDP’s Ibrahim Solih won the 2018 presidential elections, and MDP secured a majority in the subsequent parliamentary polls (and installed Nasheed as speaker of the People’s Majlis, Maldives’ parliament). To the surprise of many, Yameen conceded power, so the country now appears to be back on the path toward democracy.

Meanwhile, in the 2017 local elections, the center-right MDP (then in opposition in the national government) won the most council seats and secured majorities of the councils of Maldives’ biggest cities, Malé, Addu and Fuvahmulah. Yameen’s then-ruling nationalist Progressive Party of Maldives (PPM) came in second, and various other parties won seats. In the upcoming elections, therefore, MDP will try to defend its positions.

Consolidation of Democracy in Maldives

The consolidation of democracy remains an ongoing challenge. Political Islam, a longtime current in Maldives, which is officially 100 percent Sunni Muslim, is becoming both more prominent and more extreme. In fact, Maldives has one of the highest per capital levels of recruitment into the Islamic State to fight in Iraq and Syria – estimates put the number of Maldivian fighters around 200, which doesn’t seem like many, but given Maldives’ population, it is a high proportion. Saudi funding for extremist imams also exacerbates the problem.

Yameen, for his part, is currently in prison for money laundering, although he is seeking release in order to run in the 2023 presidential election.

Maldives has become a flashpoint for Sino-Indian competition. Yameen ran up a massive debt to China (which invested heavily in Maldives as part of the Belt and Road Initiative), with no real plan to pay it back. Yameen was subsequently jailed and fined for corruption. When MDP came back into power, India offered a loan to help repay the debt, which some fear could be as high as USD $3 billion. This has been cited as yet another example of China’s use of debt-trap diplomacy to secure strategic advantage for itself.

Nike Ching, Voice of America (October 28, 2020): US to Open Embassy in Maldives Amid Geopolitics Competition with China