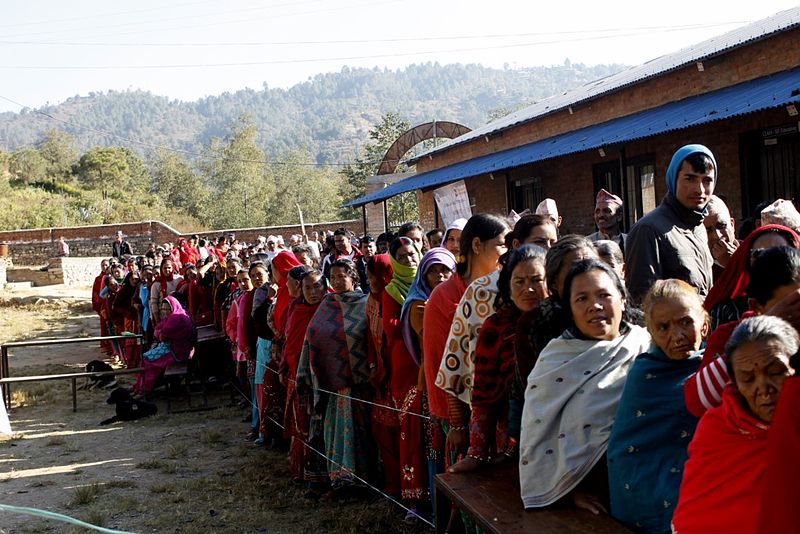 Nepal voters waiting to cast their ballots in 2016. Nepalis will once again have to wait a bit longer to cast their ballots as snap elections set for November have been postponed. Elections will probably take place when they are actually due, in January 2022. Photo credit: Wikimedia/Krish Dulal (CC BY-SA 3.0)

Helen Davidson, The Guardian (July 13, 2021): China bans pro-democracy candidates in Macau elections: Move mirrors crackdown in Hong Kong and comes despite pledges the territory would have high levels of autonomy

Japan General Elections: On or Before October 22, 2021 (plus Hyogo Prefecture gubernatorial election on July 17).

Timor-Leste Local Elections: October 2021 (due) and Presidential Election: March 2022 (due)

The Economist (July 15, 2021): Sri Lanka’s Rajapaksa dynasty is not as secure as it appears

Arunabh Saikia, Scroll India (July 15, 2021): BJP did not sweep UP rural council polls. But does that matter ahead of the assembly elections?

Philippines holds its next presidential election on May 9, 2022. In 2016, populist firebrand Rodrigo Duterte won the presidency, claiming to be an outsider. He has governed with an iron fist. Although he is banned from seeking a second term (as Philippines presidents are not able to seek re-election), critics fear that he will seek to consolidate illiberalism in the form of a handpicked successor, potentially his daughter Sara Duterte. Meanwhile, a broad coalition of opposition figures have formed 1Sambayan (One Nation) in the hopes of defeating Duterte’s allies with a united front.

Nepal Snap Parliamentary Elections: November 12 and 19, 2021 (POSTPONED – elections will likely happen when due in January 2022)

Nepal had planned to hold snap elections in November 2021, following a protracted political crisis, but now the snap elections have been cancelled, and the current thinking is that the parliamentary elections will take place when they are due in January 2022. For background: in December 2020, Nepal’s prime minister decided to dissolve parliament and call for new elections. However, on February 23, the Supreme Court overturned the decision, cancelling the snap elections. The government subsequently lost a confidence vote, sparking snap polls. More

AP (July 18, 2021): Nepal’s new PM gets confidence vote in parliament: Nepal’s new prime minister got the support of more than half the members of House of Representatives, allowing him to continue in power until general elections scheduled for next year

Binaj Gurubacharya, The Diplomat (July 14, 2021): Nepal Gets a New Prime Minister (For Now)

Munkhnaran Bayarlkhagva, Al Jazeera (July 18, 2021): Mongolia edges towards autocracy: The consolidation of power in the hands of the MPP is pushing the country towards a hybrid single-party regime.