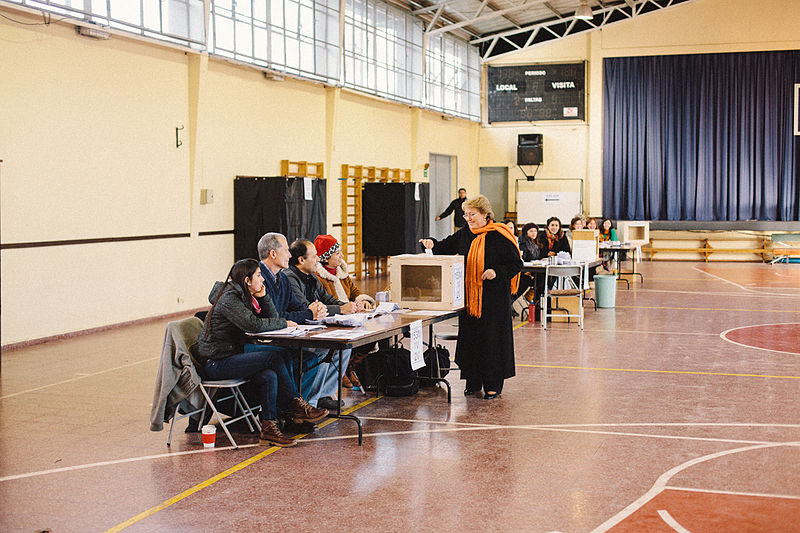 A polling station during Chile’s 2013 primaries. Incidentally, the voter is Michelle Bachelet, who would go on to be elected president once again in that election (having previously served as president from 2006 to 2010. Chile held primaries on July 18 that returned surprise results both on the left and on the right. Photo credit: Wikimedia/Michelle Bachelet (CC BY-SA 2.0)

Interim Prime Minister Claude Joseph says Haiti still plans to hold long-overdue legislative elections on September 26, 2021, along with a a presidential election. Allegations of fraud followed Haiti’s presidential 2015 election, sparking a political crisis that remains ongoing. Some have called for the upcoming elections to be delayed.

Jorge Fontevecchia, Buenos Aires Times (July 17, 2021): Domingo Cavallo: ‘It would be good for the country if the government had a bad election, come November’

Carlos F. Chamorro, Confidencial (July 13, 2021): The Dictatorship’s Future in 2022: a Government with No Legitimacy

In the July 18 primary elections, the conservatives chose Sebastian Sichel as their presidential candidate, anile

Peter Zimonjic, CBC News (July 15, 2021): The federal election hasn’t started yet — but the parties are in full campaign mode

Uruguay holds general elections in 2024. The 2019 presidential election ended 15 years of leftist government by the center-left and social democratic Frente Amplio (Broad Front) coalition when center-right candidate Luis Lacalle Pou won (after he himself defeated a right-wing populist in his party’s primary). Corruption allegations and slow economic growth preceded the elections, leading to a vote for change.

Carina Novarese, Americas Quarterly (July 14, 2021): The Mayor Who Wants to Be Uruguay’s President

Frances Robles, New York Times (July 11, 2021): Cubans Denounce ‘Misery’ in Biggest Protests in Decades: The rallies, widely viewed as astonishing for a country that limits dissent, were set off by economic crises worsened by the pandemic.