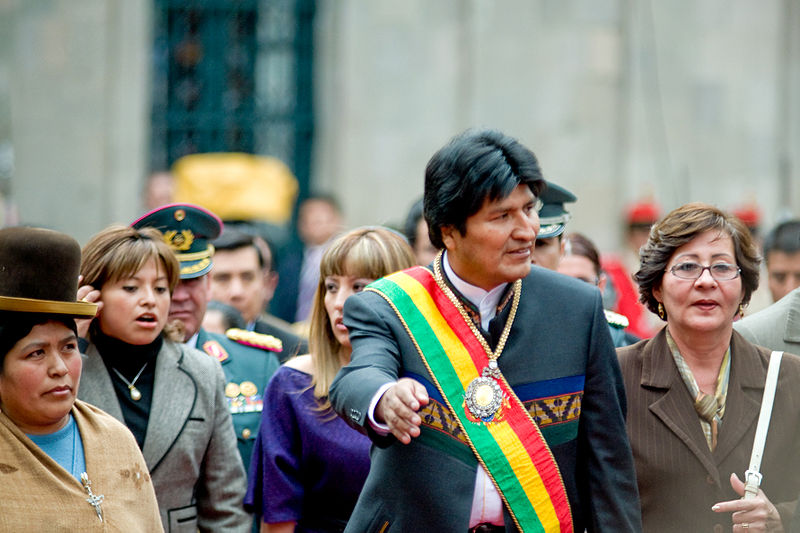 Bolivia’s former president Evo Morales recently returned to the country, and will lead his Movement for Socialism (MAS) party into the upcoming regional and municipal elections. Photo credit: Wikimedia/Joel Alvarez (CC BY 3.0)

Brazil will hold municipal elections on November 15, 2020, with a second round on November 29, 2020. For background: the 2018 elections in Brazil swept controversial right-wing populist firebrand Jair Bolsonaro into the presidency. Bolsonaro, sometimes dubbed the “Trump of the Tropics,” ran against a political establishment notorious for corruption. However, his attitudes toward race and gender, and his attacks on the media, have raised concerns among many Brazilians. The country remains deeply polarized between right and left. The local elections are an important test for Bolsonaro, who is up for re-election in 2022. More

Dorah Feliciano, The Rio Times (November 17, 2020): Ten Brazilian Cities Will Be Led by Indigenous Mayors in 2021

Venezuela plans to hold legislative elections on December 6, 2020, despite members of the opposition and international community calling for a delay in order to ensure credible, fair elections. These elections are taking place in the context of ongoing political, constitutional, and humanitarian crises have been going on for years. More

Our team traveled to 6 Venezuelan states despite the lockdown & gas shortages to speak to provincial chavistas who were punished for speaking out about the injustices of Maduro's government. Thanks to @IsayenHG @surdaneta @tibisayromero @Adriaventuras. https://t.co/oHy5vBslz5

Haiti is overdue to hold local and parliamentary elections. The elections were initially scheduled for October 27, 2019 but have been postponed indefinitely. In addition, the next presidential election is due by November 2021. Further, the country may hold a constitutional referendum before any of aforementioned elections take place. The country is currently in a political crisis related to allegations of fraud followed Haiti’s presidential 2015 election. More

Sandra Lemaire and Matiado Vilme, Voice of America (November 19, 2020): Haitian Protesters Clash with Police During Call for President to Resign

Bolivia is due to hold regional and municipal elections on March 7, 2021. These follow a rerun of the 2019 annulled general elections that took place on October 18, 2020 in which socialist Luis Arce won the presidency. More

El Salvador is due to hold legislative elections and local on February 28, 2021. The upcoming elections are taking place in the context of increased authoritarianism under President Nayib Bukele, a populist elected in 2019. More

Alexander A. Kravetz, Washington Post (November 19, 2020 – letter to the editor): El Salvador needs to be ‘honestly confronted’ about its backsliding on democracy

Marco Aquino and Marcelo Rochabrun, Reuters (November 20, 2020): Exclusive: Peru’s Sagasti says he will not push for referendum on constitution

Reuters (November 19, 2020): Peru’s youth helped take down a president. Now they want changes to the constitution.

AP (November 17, 2020): In Peru, a hope that a new president, centrist Francisco Sagasti, can calm country in crisis

Patricio Navia, Americas Quarterly (November 16, 2020): Peru’s Problem Is Bigger Than Not Having a President

Canada’s 10 provinces and three territories all hold provincial and municipal elections at different times. Several held elections this year, and several are due to hold elections in the next year. More

← Asia This Week: November 20, 2020
Republic of the Congo Legislative and Local Elections: July 2022 →
By continuing to browse the site you are agreeing to our use of cookies.
Share This