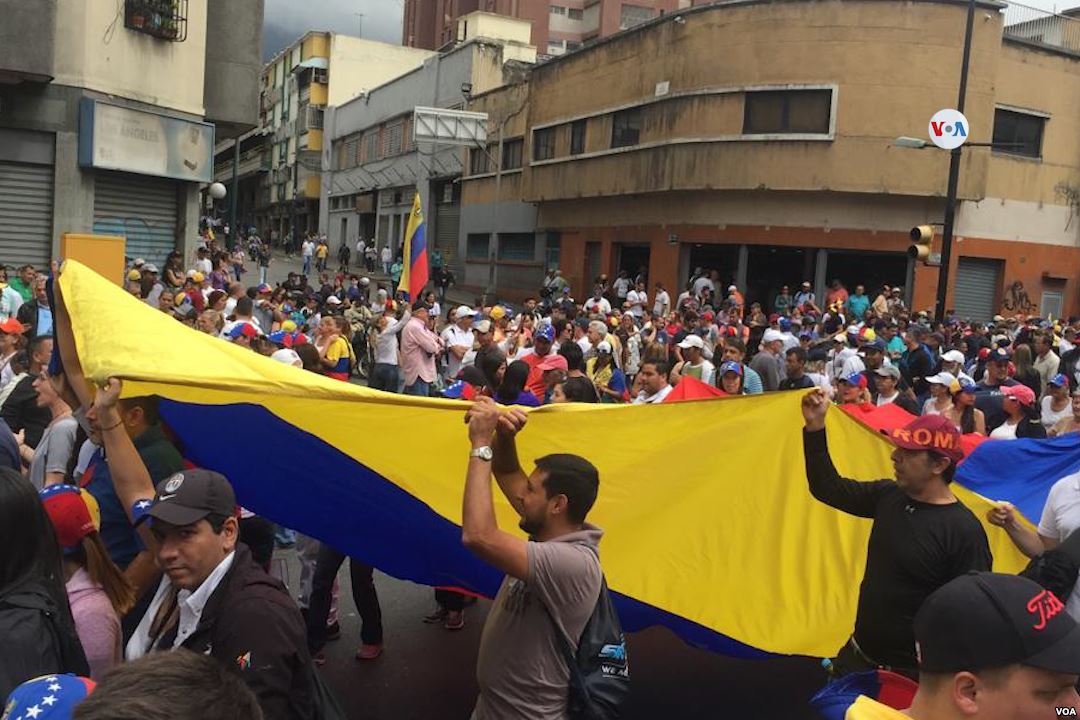 A protest in Caracas, in January 2019, following the disputed presidential election in Venezuela. Photo credit: Voice of America (public domain)

Venezuela held legislative elections on December 6, amid a boycott by the opposition and low turnout (31 percent). With these elections, widely considered to be a sham, President Nicolás Maduro gained control of all of Venezuela’s major government institutions. Venezuela’s humanitarian crisis and political standoff continue, although the opposition’s future remains uncertain.

These elections are taking place in the context of ongoing political, constitutional, and humanitarian crises have been going on for years.

For background: From 1958 until 1998, Venezuela had three dominant parties that governed in turn under the Punto Fijo Pact. The leaders of the three parties were anti-dictator (having removed the military dictator Marcos Pérez Jiménez) and anti-communist, and “puntofijismo” brought stability, prosperity, and democracy (even if it was imperfect).

However, the 1998 elections in Venezuela led to a major political realignment, and ushered in leftist strongman Hugo Chávez, a populist and self-described Marxist. His United Socialist Party (PSUV) also won control of the legislature. Chávez went on to govern until his death in 2013, and under his rule, Venezuela began its descent into dictatorship. Chávez died in 2013, and his handpicked successor, Nicolás Maduro, assumed the presidency.

Repression worsened under Maduro. Nevertheless, the opposition persisted. In 2015, despite harassment, intimidation, and an uneven playing field, the opposition Movement for Democratic Unity (MUD) coalition managed to win a supermajority in the National Assembly. For the first time since 1999, PSUV and its allies did not control the legislature, which has significant de jure powers.

However, Maduro, having no intention of “surrendering the revolution,” and fearing he would lose the upcoming regional and presidential elections, called for elections for a “Constituent Assembly” in 2017. These elections took place in the midst of conflict with the National Assembly, protests, and a worsening economic crisis. The opposition boycotted; therefore, all of the members are loyal to Maduro. The Constituent Assembly continues to operate as a parallel legislature, attempting to thwart the National Assembly.

The disputed presidential elections in May 2018 continued the crisis. Officials declared Maduro the winner, but both the opposition and international analysts denounced the elections as illegitimate. In fact, the opposition mostly boycotted the polls.

Because Venezuela’s constitution stipulates that the leader of the National Assembly becomes interim president if the office is vacant, many of the world’s free democracies recognized then-35-year-old Juan Guaidó as interim president until the country holds new elections.

However, Maduro is clinging to power and his forces are violently cracking down on the opposition. The regime has deployed death squads. Still, the opposition perseveres.

As a major oil producer, Venezuela should be a rich country, but due to poor governance, the country is in a humanitarian crisis. Hyperinflation has resulted in 90 percent of Venezuelans being unable to afford sufficient food, and as many as 3.4 million people (more than 10 percent of the population) have fled since 2015. Furthermore, the capital, Caracas, is one of the most violent cities in the world.

The 2020 Legislative Elections in Venezuela

The opposition went into these elections divided. Although the long-fractious opposition united around Guaidó in 2019, cracks are beginning to show.

Guaidó and others decided to boycott. On the other hand, prominent opposition figures such as former presidential candidate Henrique Capriles have said the opposition should contest the elections. While Guaidó aimed to avoid legitimizing a fraudulent election, Capriles hoped to galvanize a Belarus-style protest movement that would ultimately lead to Maduro’s fall from power. Importantly, a divided opposition will likely help Maduro remain in power.

Venezuela is a major oil producer. Therefore, major powers have involved themselves in Venezuelan politics. Authoritarian regimes such as Russia, China, and Iran back Maduro and most of the free world backs the opposition.

The Economist (September 10, 2020): No good options for Venezuela’s divided opposition

BBC (January 13, 2020): Venezuela crisis: How the political situation escalated
Diego A. Zambrano, Lawfare (March 18, 2019): The Constitutional Path to Dictatorship in Venezuela
21votes does not necessarily agree with all of the opinions expressed in the linked articles; rather, our goal is to curate a wide range of voices. Furthermore, none of the individuals or organizations referenced have reviewed 21votes’ content. That is to say, their inclusion should not be taken to imply that they endorse us in any way. More on our approach here.

← Saint Vincent and the Grenadines Parliamentary Elections: November 5, 2020
Finland Municipal Elections: June 13, 2021 (postponed from April) →
By continuing to browse the site you are agreeing to our use of cookies.
Share This