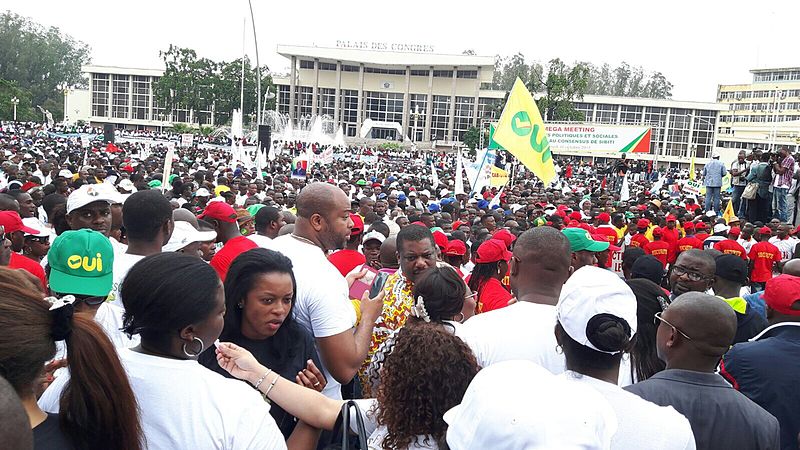 Supporters of the 2015 referendum to remove presidential term limits and allow Sassou to run for another term demonstrate in front of the parliament building in Brazzaville. Elections in the Republic of the Congo have been marred by fraud and violence. Photo credit: Wikimedia/Daniel Massamba (CC BY 2.0)

The Republic of the Congo (sometimes called Congo-Brazzaville) will legislative and local elections in July 2022. The exact date is yet to be decided, but the government has confirmed that the elections will take place in 2022. These follow the 2021 presidential election.

Denis Sassou Nguesso has ruled the Republic of the Congo as president almost continuously since 1979. Called a “Pierre Cardin Marxist” because of his affection for luxury goods, Sassou has ruled with an iron fist and maintained power by repressing his opponents. He lost an election to Pascal Lissouba from the main opposition party Pan-African Union for Social Democracy (UPADS) in 1992. However, Sassou ousted Lissouba in 1997, following a civil war, the country’s second in a decade. He has remained president ever since.

Prior to the 2016 presidential election, Sassou Nguesso held a referendum to remove presidential term limits, which sparked protests, some violent. A crackdown on the opposition followed. The opposition boycotted the referendum, and it therefore passed overwhelmingly

The opposition called the 2016 elections an “electoral holdup” amidst widespread reports of electoral fraud and an internet and mobile blackout. Following the election, Sassou jailed his two of his opponents: Jean-Marie Michel Mokoko and Andre Okombi Salissa.

The 2021 Election in the Republic of the Congo

Sassou ran for yet another term in 2021. His Congolese Party of Labor (PCT) unanimously nominated him as a candidate. Six other candidates are on the ballot, although the main opposition (UPADS) boycotted.

Sassou ultimately was declared winner with 88 percent of the vote, and his main opponent, Guy Brice Parfait Kolélas, who placed second in 2016, died of covid-19 right after the election.

Guiseppe Liguori, Focus on Africa (February 28, 2021 – in Italian): Republic of the Congo: Sassou-Nguesso, a bloodthirsty and ruthless tyrant

Andréa Ngombet, Vanguard Africa (March 20, 2020): We mustn’t allow another sham election in the Republic of Congo