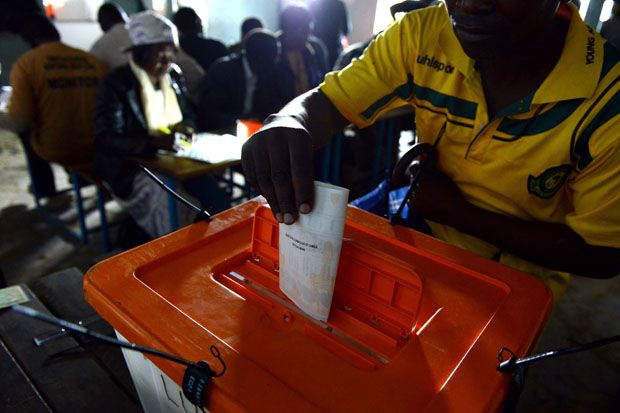 A voter in Zambia in 2015. Zambia heads to the polls this month for crucial elections. Photo credit: Flickr/Government of South Africa (CC BY-ND 2.0)

Zambia has scheduled general elections for August 12, 2021. They follow a hotly-contested campaign between President Edgar Lungu and Hakainde Hichilema, the main opposition leader, who narrowly lost to Lungu in 2016.

Zambia used to be a model democracy in the region, with regular, competitive elections and a vibrant civil society. However, under Edgar Lungu, elected in 2015 to complete the term of Michael Sata (who died in office), Zambia began to regress toward authoritarianism. The 2016 elections were marred by political violence and allegations of vote-rigging but ultimately judged credible. However, there are concerns about prospects for free and fair elections this year, and the election has once again been marred by violence. More

Having taken a page from Marie Antoinette's playbook, #Zambia's PF have tried to downplay the country's deepening crisis & widespread hunger. Can they pull back from the brink? My latest with @Fromagehomme and @OBrien_Kaaba on #ZambiaDecides2021
https://t.co/H1zcLBHP88

The Economist (August 7, 2021): Zambia’s election is crucial, but it’s not a fair fight: Hakainde Hichilema deserves to be elected, but the world should prepare for a rigged vote

São Tomé and Príncipe (frequently called STP) is due to hold a presidential runoff, following the first round on July 18, 2021. The runoff was supposed to take place on August 8, but faced a delay because the candidate who placed third in the first round – and thus did not make the runoff – contested the results. However, a court ordered the runoff to go forward, and it will likely take place on August 29.

Dick Kotze, The Conversation (August 10, 2021): To postpone, or not to postpone? South Africa’s local elections hang in the balance

South Africa: the Electoral Commission has applied to the Constitutional Court for municipal elections to be postponed from October, due to Covid-19 pandemic.

Unless further postponed, they should take place in February 2022.#SouthAfrica #RSA pic.twitter.com/oVdjXg4RAo

New study uncovers the cost of running for political office in #Kenya: Under current conditions, it is unlikely to seriously compete for elections without significant finances. Result: Exclusion of capable candidates with limited resources. @WFD_Democracy @WeAreNIMD @DutchMFA pic.twitter.com/3MgoEiP53c

If Kenya does not fix its electoral system, it is heading for another cycle of violence in the upcoming 2022 elections. — writes @gathara for #AJOpinion ⬇️ https://t.co/nhntia5ZvN

Christine Mungai, The Africa Report (August 3, 2021): Kenya: How the Appeal Court could shape the 2022 election

Madjiasra Nako, RFI (August 7, 2021 – in French): Chad: March for a change of course in the transition, at the call of the Wakit Tama [opposition and civil society] coalition

Benedict Moran and Jorgen Samso, NPR (August 7, 2021 – video with transcript): In Sudan, a new revolution to keep the spirit of an old revolution alive

Joint IRI/NDI report on Ethiopian elections lists progress with glass half full/half empty. One certainty is Ethiopian people want fuller glass in future given their thirst for democracy. https://t.co/76j20q3udz

Jean de Ruyt, Emerging Europe (August 9, 2021): The EU must stand for justice and democracy in Benin

← August 2021 Election Outlook
Middle East This Week: August 10, 2021 →
By continuing to browse the site you are agreeing to our use of cookies.
Share This