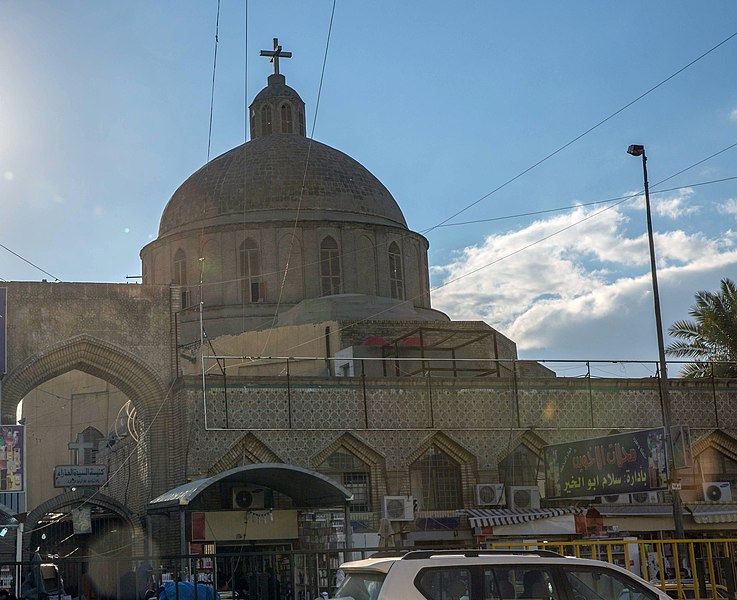 The Chaldean Cathedral of St. Joseph in Baghdad, one of the places where Pope Francis said mass on his historic visit to Iraq this month. Photo credit: Wikimedia/Aziz1005 (CC BY-SA 4.0)

Scott Peterson, Christian Science Monitor (March 4, 2021): Syria, after 10 years of conflict: No war and no peace

Liz Sly, Washington Post (March 4, 2021): He told the world about his brutal torture in Syria. Then, mysteriously, he went back.

Patrick Kingsley, New York Times (March 5, 2021): She Was a Star of New Palestinian Music. Then She Played Beside the Mosque.

Election poster for Saeed Mohammad. Caption reads “Standing in the Dust” a reference to the documentary made in Iran about IRGC commander Ahmad Motevaselian, kidnapped in Lebanon in 1982. https://t.co/iTQXxTodaa pic.twitter.com/GaJ6WmMb2m

Saeed Mohammad’s tentative bid for Iran’s presidency is important but also predictable and it’s very easy to overstate his chances.

He is by no means a prolific political figure in Iran and his presence on the ballot is unlikely to influence voter turnout.

Adel Abdel Ghafar, Brookings Institution (March 9, 2021): The arrest of Maati Monjib and the continued retreat of human rights in Morocco

Afghanistan held long-delayed parliamentary elections in October 2018, marred by violence and administrative problems. In order to fix problems from the legislative elections, the presidential election has been delayed twice. Ashraf Ghani ultimately won re-election in a very tense vote and a tense four months in between the election and the final declaration of results. The election took place amid attacks by the Taliban, which had ordered Aghans not to vote.

Pakistan held indirect Senate elections on March 3. Prime Minister Imran Khan had oped his allies would gain a majority in the upper house, especially since a majority of the electors – MPs and provincial legislators – belong to his PTI. However, in a secret ballot, many crossed party lines and voted for opposition candidates, thus denying Khan his majority.