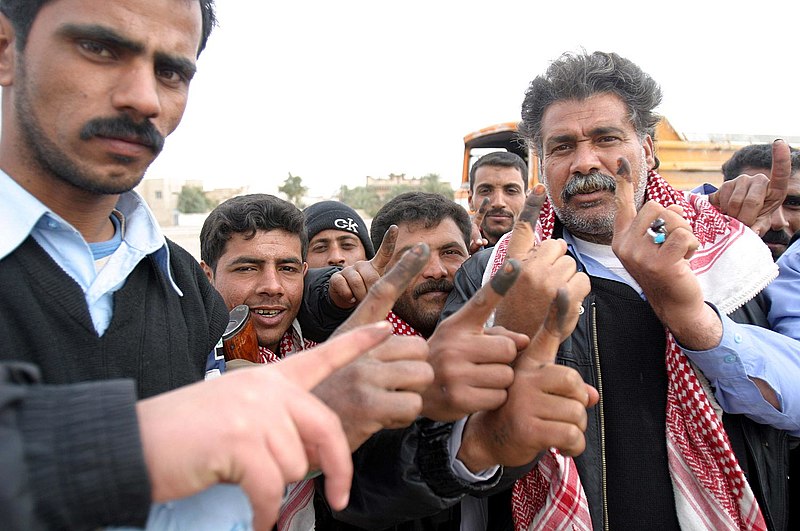 Iraq held early elections on October 10 (postponed from the original proposal of holding them on June 6, 2021, one year early) as a result of the pro-democracy protests that began in 2019.

In addition, Iraq is overdue to hold provincial (sometimes called governorate) elections, in which voters will elect provincial councils. Originally scheduled for December 2018, these elections have been delayed multiple times following controversial national elections in May 2018 (the first since the defeat of ISIS).

These elections are taking place in the context of widespread protest and political instability.

Iraq Elections Since the Fall of Saddam

Since the fall of Saddam Hussein, Iraq has held competitive – if imperfect – elections. However, the security situation remains tense, despite the defeat of ISIS in 2017 (ISIS, among other groups, continues to carry out attacks in Iraq). The country has nearly 2 million internally displaced people. Corruption continues to hamper political and economic development.

Sectarian fighting – both in the form of political tensions and also outright violent conflict between ethnic militias – remains an ongoing problem. In brief, Iraq is split between three major groups – Sunni Arabs, Shiite Arabs, and Kurds (with a handful of smaller groups such as Yazidis, Christians, Turkomen, etc). Shiites constitute a majority, but faced particular oppression under Saddam. However, following the collapse of Saddam’s Baathist regime, they became dominant politically. Nonetheless, Sunnis and Kurds are represented in parliament. Furthermore, the groups are not monolithic – both Sunnis and Shiites have factions that favor religious rule facing off against secularist factions, and there is a contingent of Iraqi nationalists who oppose sectarianism altogether.

In an unexpected result in the 2018 elections, Shiite cleric Muqtada al-Sadr‘s Saairun (Forward) alliance pulled out a surprise victory and won the most seats – 54 out of 329 seats in the Council of Representatives (CoR), Iraq’s unicameral parliament. Sadr led the Mahdi Army, which fought against American troops following the 2003 invasion, and was a major combatant in the subsequent sectarian fighting. But in a change of tactics, the militia has re-branded itself and is now the Peace Brigades.

In October 2019, a political crisis began following mass protests over corruption, unemployment, and foreign involvement in Iraqi politics. The protests, which resulted in 500 deaths and thousands of injuries, led to the resignation of Abdul-Mahdi – the first ouster of a prime minister since the fall of Saddam. Even though the vast majority of the protesters were Shiite (and in fact Sunnis remained largely disengaged), they nonetheless called for the fall of the Shiite-dominated government, arguing that the Shiite parties haven’t delivered on their promises after 16 years in power. They also called for reduced Iranian involvement in Iraqi politics.

Moreover, protesters called for an end to the muhasasa system, which distributes positions to sectarian-based political parties. Although in theory the system was supposed to ensure representation for all of Iraq’s ethnic groups, in reality, it has fueled corruption and sectarian tensions, benefiting only a small number of elites.

As a result of the protests (and at the urging of Grand Ayatollah Ali al-Sistani, Iraq’s most important Shiite cleric, who has been an éminence grise in Iraqi politics since the fall of Saddam), Abdul-Mahdi announced his resignation at the end of November 2019. After months of deadlock and several false starts, former intelligence chief Mustafa Al-Kadhimi finally became prime minister. However, the cabinet remains incomplete, and many of the underlying issues remain unresolved.

The Shi’ite firebrand cleric Muqtada al-Sadr, one of Iraq’s most influential politicians, had announced a boycott, but ultimately reversed course and urged his followers to support the elections.

Sadr subsequently proceeded to win the elections, which had by some counts the lowest turnout in Iraq’s history, at 36 percent. Some figures from the 2019 protest movement did end up winning seats. Renad Mansour notes: “They share a distrust of and impatience with the Iraqi political system and seek to curb the entrenched corruption that has created a narrow ruling elite. This system has proved resilient to all challenges, but the burgeoning coalition of reform-minded political groups holds out the prospect of at least incremental change in Iraq.”

Pro-Iran Shi’ite parties challenged the election results. The Supreme Court rejected the challenge, and Sadr, who opposes both Iranian and American influence in Iraqi politics – will be the kingmaker as the new government forms. More

Competition between Iran and the United States plays out in Iraq. Most notably, Iranian general Qasem Soleimani, commander of the elite Quds Force, was killed by an American airstrike in Baghdad. Similarly, Iraq also plays into the region-wide conflict between Iran and Saudi Arabia, with each backing various factions in Iraqi politics.

Dave Gavlak, Voice of America (December 26, 2021): In 2022, Iraq Expected to Struggle for Sovereignty Amid Tug of War

NPR (October 28, 2021 – audio): Why Iraq’s Protest Movement Led To An Election That Millions Sat Out

Al-Monitor (August 27, 2021): Iraq’s Muqtada al-Sadr announces support for elections: Sadr’s announcement comes a month after he called on his supporters to boycott the October elections

Bobby Ghosh, Bloomberg (October 3, 2020): Why are protesters back on Iraqi streets?

Munqith Dagher, CSIS (May 19, 2020): The New Three-Dimensional Political Situation in Iraq: An Iraqi Point of View

Al Jazeera (May 7, 2020): Who is Mustafa al-Kadhimi, Iraq’s new prime minister? Al-Kadhimi is viewed as pragmatic as well as having good relations with main players across Iraqi political spectrum

← Africa
Jordan Local and Gubernatorial Elections: August 2021 (due) →
By continuing to browse the site you are agreeing to our use of cookies.
Share This