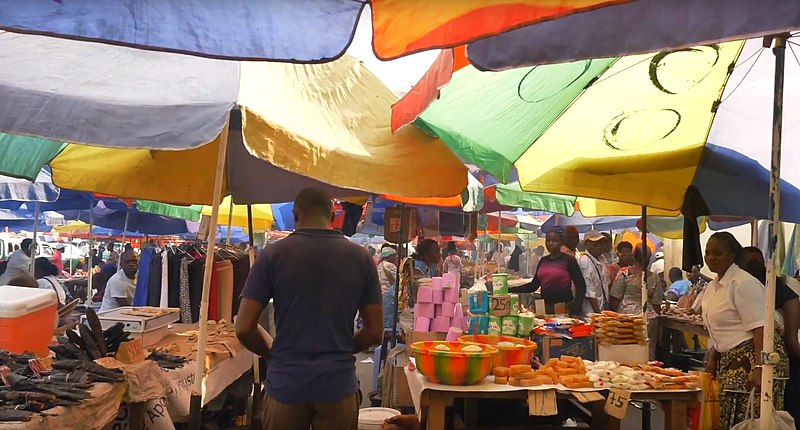 A market in Brazzaville, Republic of the Congo. Photo credit: Wikimedia/Creative Studio (CC BY 3.0)

Loïcia Martial, RFI (May 26, 2022): Congo-B: the opposition divided on its participation in the next legislative elections

Joachim Buwembo, The East African (May 28, 2022): Why Ugandans panic when Kenya ‘renovates its roof’ every five years

Patrick Anam, The Diplomat (May 27, 2022): Is Japan Beginning to Overtake China on Infrastructure Financing in Kenya? A closer look at the trends and differences in Japanese vs. Chinese lending to Kenya

Charlie Mitchell, African Business (May 26, 2022): Kenya elections: Ruto and Odinga square up to fight for presidency: Kenya’s August presidential elections have profound implications for growth and development across East Africa. What are the issues the candidates have to address?

Tom Wolf, The Elephant (May 24, 2022): Why Opinion Polls May Not Always Predict Election Outcomes in Kenya

Angola holds presidential and legislative elections on August 24, 2022. The country has not to date held free elections. The People’s Movement for the Liberation of Angola (MPLA), a former armed group, has been in power since since independence in 1975. For 38 years, the MPLA’s José Eduardo Dos Santos ruled Angola with an iron fist. His regime engaged in rampant corruption and kleptocracy. Dos Santos’s successor, João Lourenço, has enacted some reforms and sought to curtail corruption, but many issues remain. Moreover, local elections (the country’s first) have been delayed repeatedly, at times sparking protests. The political climate remains tense.

However, MPLA’s vote share has been steadily decreasing with each successive election: it received 81 percent of the vote in 2008, 72 percent in 2012, and 61 percent in 2017. For the upcoming elections, the three main opposition parties will back a single presidential candidate: Adalberto Costa Junior, leader of UNITA, the main opposition party. There are hopes that this could pave the way for a more democratic future for Angola.

Jon Schubert and Gilson Lazaro, African Arguments (May 26, 2022): Angola’s regime pushes back against a growing and united opposition

Lesotho is due to hold general elections in September or October 2022, for the third time in six years.

Liesl Louw-Vaudran, ISS Today (May 24, 2022): Red flags ahead of Lesotho’s October elections: Parliamentarians urgently need to vote on a reform bill that can bring some political stability to Lesotho

International Crisis Group (May 25, 2022): Easing the Turmoil in the Eastern DR Congo and Great Lakes

Channels (May 25, 2022): Tensions Rise Ahead Of DR Congo Presidential Election

The Horn of Africa country does not hold direct elections, but rather holds indirect elections in a clan-based system. The elections were delayed, and Farmaajo remained in office beyond the end of his term, which created a political and constitutional crisis. In April 2021, Farmaajo sought to extend his term for two years, but parliament voted to reject the extension.

An ongoing conflict between Farmaajo and Prime Minister Mohamed Hussein Roble and continual election delays exacerbated the country’s instability. Legislative elections have finally concluded after a slow, delay-ridden process, with the new lawmakers sworn in April. A new date has not been set for the presidential election, but the International Monetary Fund has set May 17 as the deadline, or else Somalia will stop receiving budget support.

The Conversation (May 27, 2022): Somalia’s new president Hassan Sheikh: his strengths and weaknesses

Todd Prince, RFE/RL (May 24, 2022): Expansion Or Contraction? How Putin’s War In Ukraine Affects His Efforts In Africa

← Americas
Middle East This Week: May 31, 2022 →
By continuing to browse the site you are agreeing to our use of cookies.
Share This