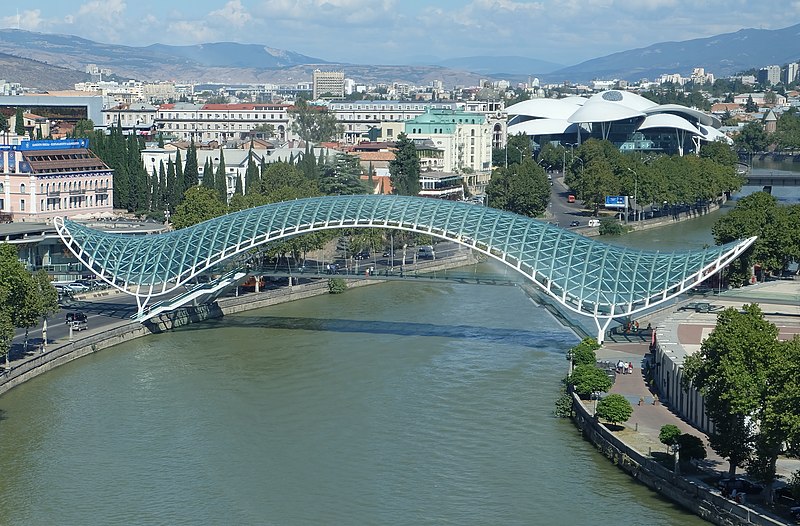 The Bridge of Peace over the Kura River in Tbilisi, Georgia. Photo credit: Wikimedia/shankar s (CC BY 2.0)

Kazakhstan will hold a constitutional referendum on June 5, 2022. This comes in response to a series of protests in January 2022 that rocked the country and left as many as 225 people dead, as well as a reported 12,000 people in detention. Russia briefly sent personnel under the auspices of the Collective Security Treaty Organization (CSTO), its military alliance of several post-Soviet states.

On June 5, voters will adopt or reject a package of 33 reforms to the constitution (about one-third of the current constitution). President Kassym-Jomart Tokayev (who called the protesters “terrorists”), claims that the reforms will transform Kazakhstsan from a super-presidential system to a “presidential system with a strong parliament.”

Bohdan Vitvitsky, Atlantic Council (May 24, 2022): The Putin puzzle: Why is the Russian dictator so obsessed with Ukraine?

Nataliya Vasilyeva, The Telegraph (May 23, 2022): Russian counsellor to UN quits over Ukraine invasion: ‘I have never been so ashamed of my country’

The last elections were snap parliamentary elections on July 11, 2021 which pro-Europe center-right president Maia Sandu had been trying to call for months because in Moldova’s parliamentary system, a legislative majority is necessary to execute on any policy agenda. Prior to these elections, party had a clear majority in parliament (and Sandu’s allies were outnumbered by pro-Russian parties), leading to political instability. Sandu’s allies ended up winning in a landslide.

Givi Silagadze and the Caucasus Datablog, OC Media (May 24, 2022): How does Georgia’s democracy compare with countries granted EU candidacy?

Ian Kelly and David J. Kramer, The Bulwark (May 24, 2022): Putin Is Failing in Ukraine, But Winning in Georgia: The government in Tbilisi is taking pages from Putin’s playbook

ABC News Australia (May 22, 2022): Volunteers who fled authorities in Belarus fight for Ukraine in hopes it will help change things in their homeland

Eurasianet (May 24, 2022): Where is Uzbekistan’s constitutional reform heading? Proposals are light on substance and mostly echo the president