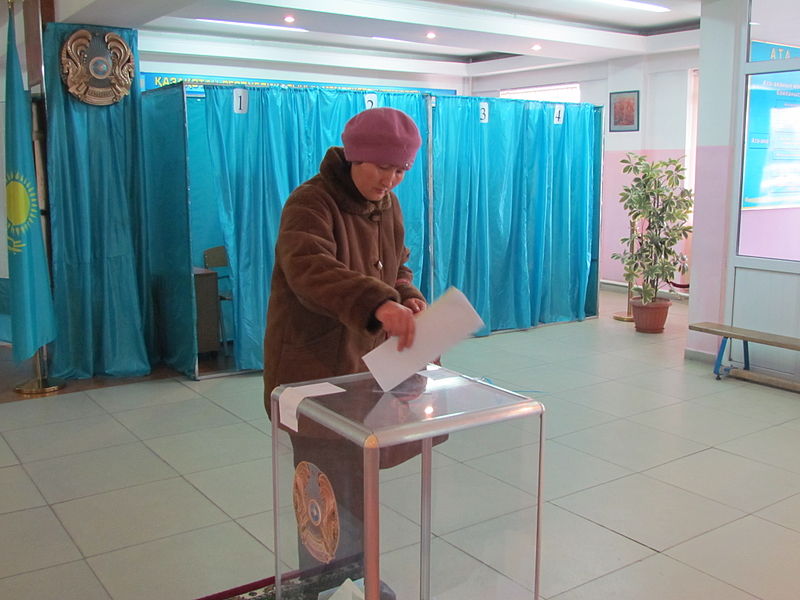 A voter in the 2012 elections in Kazakhstan. Photo credit: Wikimedia/Yakov Fedorov (CC BY-SA 3.0)

Kazakhstan has scheduled legislative elections for January 10, 2021. Voters will elect all 107 members of the Mazhilis, the lower house of the bicameral legislature (the upper house is elected indirectly).

Kazakhstan’s elections take place in the context of an authoritarian system in which critics of the government face harassment and arrest. Likewise, elections are marred by fraud and a lack of genuine competition. Moreover, corruption runs rampant.

In 2019, Kazakhstan’s longtime strongman Nursultan Nazerbayev, who ruled Kazakhstan since independence in 1991, surprised everyone by stepping down and calling a snap presidential election. Unsurprisingly, his chosen successor, Kassym-Jomart Tokayev, won in a tightly-managed election that observers judged not free and not fair. Subsequently, over 1,000 people were arrested for peacefully protesting and calling for free and fair elections.

No real opposition exists within Kazakhstan. The ruling Nur Otan (“Radiant Fatherland”) party holds 84 out of the 107 seats in the Mazhilis. The other parties are all pro-government as well; therefore, no genuine opposition has representation in the legislature.

However, Nur Otan is trying to put a patina of democratic legitimacy on itself. The party held primaries for the legislative elections in an attempt to recruit a few fresh faces for its campaign. However, critics dismiss the primary process as a sham.

These elections are taking place in the context of widespread protests related to elections throughout former Soviet Union countries. Turmoil in Kyrgyzstan led to the annulment of the October 4 parliamentary elections and the ouster of the president. Protests in Belarus over a rigged presidential election have been going on since August.

← Russia Parliamentary Elections: By September 19, 2021
Ukraine Local Elections: October 25, 2020 (Runoffs November 15 and 22) →
By continuing to browse the site you are agreeing to our use of cookies.
Share This