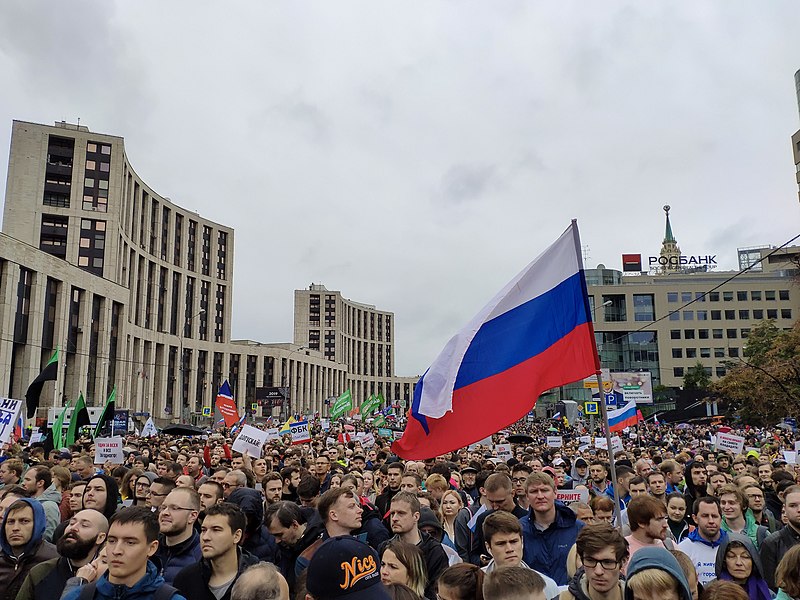 A protest in Moscow ahead of the 2019 regional elections in Russia. Photo credit: Wikimedia/Putnik (CC BY 4.0)

Russia is due to hold parliamentary elections by September 19, 2021. Voters will elect all 450 members of the State Duma, the lower house of Russia’s bicameral parliament.

Russian elections are neither free nor fair, and viable genuine opposition candidates are frequently barred from running. Opposition politicians, civil society activists, and citizens who protest are routinely harassed and arrested. Moreover, critics of the Kremlin face the constant risk of assassination, and some – such as opposition leader Boris Nemtsov and journalist Anna Politkovskaya – have met untimely ends at the hands of Kremlin thugs. Most recently, opposition leader and anti-corruption campaigner Alexei Navalny was poisoned while campaigning in Siberia ahead of this year’s local elections, and had to leave the country for medical treatment in Germany. Upon his return to Russia, he was arrested and sentenced to three years in jail, and those who protested in support of him also faced arrest. Opposition figures also face vexatious lawsuits from Kremlin allies. Meanwhile, corruption runs rampant.

Vladimir Putin, with the help of his United Russia party, has a stranglehold on Russia’s politics and state institutions. Putin won 2018’s stage-managed presidential election against a cast of absurd characters after credible opponents were banned from the contest. Putin faced the possibility of having to leave office, but a constitutional referendum passed in July 2020 changed the constitution to allow him to remain in power until 2021. Critics denounced the legitimacy of the vote.

However, Putin’s party has faced challenges in recent regional and local elections.

Challenges for United Russia in Regional Elections and Opposition Gains

Russia staggers its regional and gubernatorial elections, so in any given year, several regions hold elections.

The opposition has been making some gains in regional elections. For example, in the 2018 gubernatorial elections, United Russia lost four out of the 22 governorships up for election. Even though the winners came from “Potemkin opposition” parties that do not genuinely oppose Putin, the fact that United Russia failed to make a clean sweep could signify a decline in Putin’s popularity.

In the 2019 elections included 16 governorships, including St. Petersburg, where Putin got his political start, and the strategic Arctic port of Murmansk, as well as the Moscow City Duma. A number of genuine opposition figures sought to run for local office, but authorities blocked their access to the ballot. In response, citizens held a series of protests, resulting in a harsh crackdown. Still, the protests showed a level of coordination among the opposition not seen since the 1990s.

For the 2019 elections, Navalny and his supporters waged “Smart Vote,” a campaign of tactical voting, in which they developed a list of candidates the best chance of beating United Russia, and encouraged voters to back those candidates. Consequently, in the Moscow Duma elections, United Russia took a major hit, losing a third of its seats, despite major fraud and other irregularities. Twenty candidates on Navalny’s list won seats. However, after the elections, the Kremlin unsurprisingly waged a brutal crackdown on the opposition and civil society.

The opposition again employed Smart Vote in the 2020 regional elections. Following a series of protests, United Russia lost its majorities in the Siberian cities of Tomsk (where Navalny was poisoned) and Novosibirsk. Furthermore, Navalny allies won seats on both of those councils.

Following his poisoning in August 2020, Navalny went to Germany for medical treatment. He nearly died from the attack. However, on January 17, he returned to Moscow in dramatic fashion. He was promptly arrested at the airport upon arrival, and subsequently sentenced to three years in prison. This has sparked protests – not just in support of Navalny, but also against the Putin regime in general. The Kremlin cracked down on protesters. Russia’s treatment of Navalny has led to European Union sanctions.

The 2021 State Duma Elections in Russia

Heading into the 2021 elections, United Russia’s approval rating is a mere 30 percent. However, no one expects that the elections will be free or fair.

Political scientist Ben Noble at University College London notes that the Kremlin has several “tools” to maintain power despite unpopularity, including: “Allowing United Russia politicians to run as independents to escape the ‘party of power’s’ toxic brand; blocking the registration of systemic and non-systemic opposition candidates; backing new parties that might capture narrow slivers of the electorate, but that can be relied upon to support the authorities if elected; three-day voting; allowing voting outside polling stations; electronic voting; pressure on opposition individuals and organizations, including law enforcement searches of their offices; and so on.”

In 2005, Putin called the breakup of the Soviet Union the “greatest geopolitical catastrophe of the last century.” He reiterated those comments in 2018. To that end, he has sought to influence politics in the counties of the former Soviet Union – sometimes violently. For example, Russia invaded Georgia in 2008 and continues to occupy 20 percent of its territory. Russia is currently waging a war against Ukraine, after annexing Crimea. Meanwhile, Russia continues to perpetuate frozen conflicts, which sometimes go hot. Most recently, the previously-frozen conflict between Armenia and Azerbaijan reignited into a shooting war.

Kirill Martynov, Moscow Times (December 3, 2020): Russia Is Preparing for Another Round of Fraudulent Elections

← Estonia Municipal Elections: October 17, 2021
Kazakhstan Legislative Elections: January 10, 2021 →
By continuing to browse the site you are agreeing to our use of cookies.
Share This