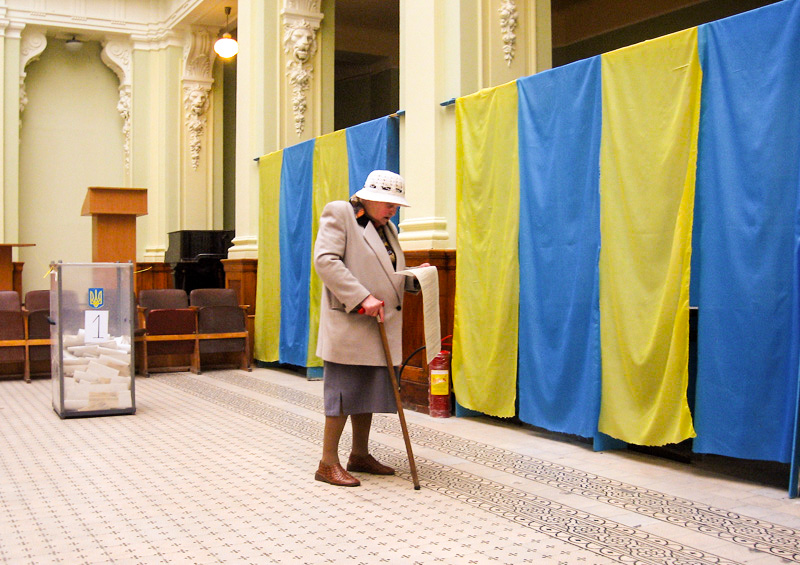 A voter in the 2007 parliamentary elections in Ukraine. Photo credit: Wikimedia/Russianname (CC BY-SA 4.0)

Ukraine held local elections on October 25, 2020. Mayoral runoffs in some cities will take place on November 15, and the rest will happen on November 22.

These elections are happening in the context of a hybrid war that Russia is waging on Ukraine – currently in its seventh year – and Russia’s illegal annexation of Crimea.

Since the 2013-2014 Euromaidan protests that ousted pro-Russian president Viktor Yanukovych from office, Ukraine has been implementing a series of reforms and making progress toward a stronger democracy. Nonetheless, many issues remain – notably endemic corruption.

In the local elections, President Volodymyr Zelenskyy and his party sought to consolidate power further, after victories in recent presidential and legislative elections. Zelenskyy, a former actor and comedian, won the 2019 presidential election by a landslide, trouncing incumbent Petro Poroshenko and political veterans such as former prime minister Yulia Tymoshenko, as well as the pro-Russian Opposition Platform, currently led by oligarch Viktor Medvedchuk, who is a close associate of Vladimir Putin.

Zelenskyy had not had any previous experience in politics, but more than half the country had watched his satirical television show “Servant of the People.” Naturally, he named his party after his TV show. Servant of the People subsequently swept the parliamentary elections to win an unprecedented majority. More than half of its MPs are new to politics.

Kateryna Semchuck, openDemocracy (November 13, 2020): In Ukraine, local elections legitimise a new political system – and the old faces behind it

← Kazakhstan Legislative Elections: January 10, 2021
Australia, Western Australia State Elections: March 13, 2021 and New South Wales Local Elections: September 2021 (due) →
By continuing to browse the site you are agreeing to our use of cookies.
Share This