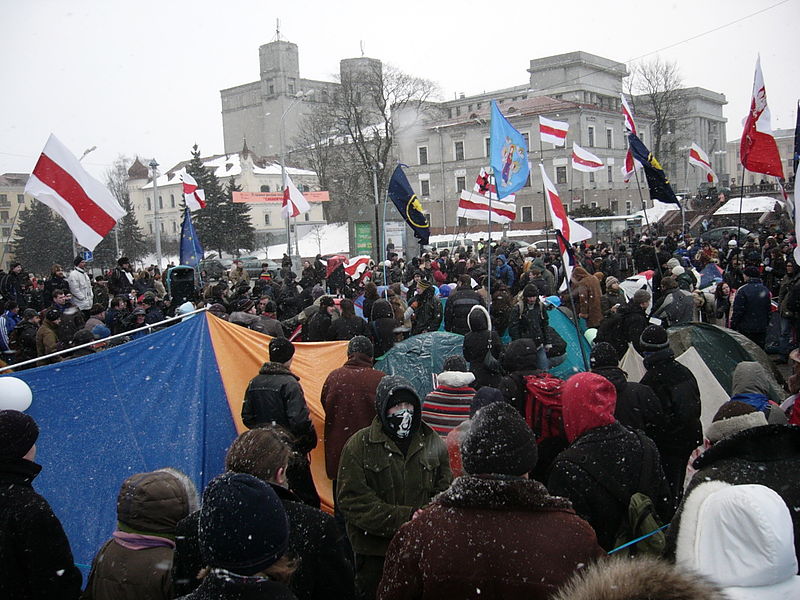 Belarus held a presidential election on August 9, 2020. In a vote widely deemed not free and not fair, incumbent Alexander Lukashenko declared victory. However, the opposition declared that Svetlana Tikhanovskaya had in fact won. Hundreds of thousands of Belarusians have taken to the streets in protest since the election, even in the face of assault and arrest by security forces.

Tikhanovskaya fled the country and is currently in Lithuania, and a number of governments worldwide have recognized her as the legitimate president of Belarus. The opposition is calling for fresh elections.

For decades, Belaraus – sometimes called “Europe’s last dictatorship” – has had choreographed elections and minimal space for political dissent, with periodic violent crackdowns on opposition. Lukashenko has been in power since the establishment of the office in 1994.

The opposition has boycotted a series of recent elections. In 2016 parliamentary polls, two opposition candidates – Alena Anisim and Hanna Kanapatskaya – won seats, despite the elections being widely judged as neither free nor fair. Conversely, no opposition candidates won seats in the 2019 parliamentary elections (which took place a year early). In addition, both Anisim and Kanapatskaya were barred from being candidates. Observers noted blatant irregularities (for example, an observer videotaped ballot stuffing, but the authorities did nothing to stop the fraud). Lukashenko called on Belarusians to make sure the parliamentary elections were “calm and quiet” – in short: vote for his candidates, not the opposition.

The 2020 Presidential Election and A Serious Challenge to Lukashenko

Lukashenko is the only person who has ever served as president of Belarus, and had not – until 2020 – faced a serious challenge. For example, during the 2015 presidential elections, he received 84 percent of the vote, and opposition candidate Tatsiana Karatkevich received 4.5 percent (the “against all” option received the remainder).

However, for the 2020 presidential election, the opposition made the decision to field a single candidate against Lukashenko. Moreover, the government’s handling of the COVID-19 pandemic opened up the space for a genuine challenge. But a pre-election crackdown and arrests of over 120 opposition figures, journalists, bloggers, and other dissenting voices threatened to throw a wrench into the opposition’s plans. Furthermore, the election commission denied registration to the two candidates seen as the biggest threats to Lukashenko: banker Viktor Babariko and former ambassador to the United States Valery Tsepkalo, who has since fled the country.

However, on July 17, much of the opposition united around Svetlana Tikhanovskaya, a 37-year-old language teacher and wife of Sergei Tikhanovsky, a popular YouTube blogger who waged an anti-Lukashenko campaign called “Stop the Cockroach.” He had planned to run for president himself, but was denied registration and subsequently arrested. He remains in prison.

Both the Babariko and Tsepkalo campaigns threw their support behind Tikhanovskaya. In short order, Tikhanovskaya rose quickly to run a serious campaign that has inspired many Belarusians. In short, Tikhanovskaya’s candidacy, with a united opposition behind her, posed the biggest challenge yet to Lukashenko’s rule.

The Aftermath of Belarus’ 2020 Presidential Election and Ongoing Protests

Following the election, Lukashenko was deemed the winner, with 80 percent of the vote. However, to the surprise of some people, hundreds of thousands of ordinary Belarusian citizens refused to accept the result, and took to the streets. Protests have been ongoing, and the situation remains fluid.

Russia pushing for closer integration with Belarus within the framework of a “Union State” – perhaps as a precursor to an attempt to annex Belarus. Meanwhile, relations with the West are beginning to thaw. In short, Belarus is playing its own game, and is also a site of geopolitical competition between Russia and the West.

Steven Erlanger, New York Times (October 12, 2020): E.U. Agrees to Penalize Lukashenko, but Gives Him Time to Back Down

Alan Taylor, The Atlantic (August 20, 2020): Anger and Protest Over a Presidential Election in Belarus

Meduza (July 27, 2020): ‘This is a turning point in Belarusian history’ Opposition leader Svetlana Tikhanovskaya on how her presidential campaign is taking on Lukashenko