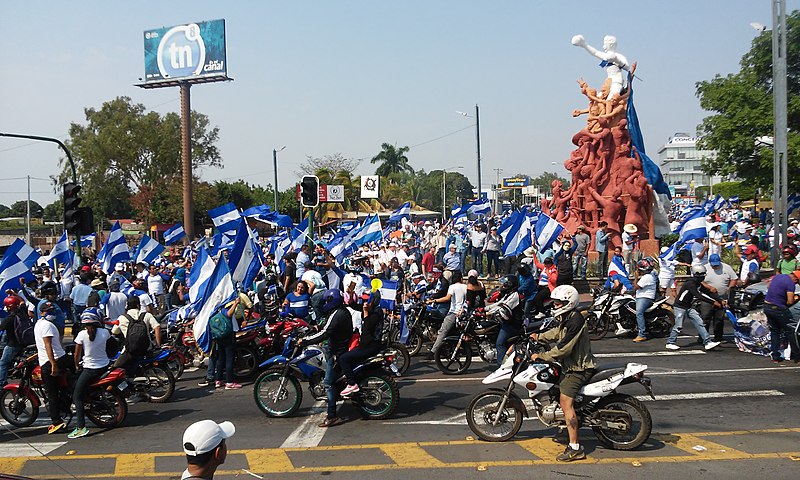 A protest against government repression in Managua, Nicaragua in 2018, at the moment to Alexis Arguello, a boxing champion who became mayor of Managua and was then assassinated. Photo credit: Wikimedia/El arzobispo (CC BY-SA 4.0)

Greg Mercer, Globe and Mail (August 1, 2021): As election looms, unity felt across Nova Scotia amid pandemic may be fading

Allegations of fraud followed Haiti’s presidential 2015 election, sparking a political crisis that remains ongoing. Some have called for the upcoming elections to be delayed, but the interim government has said they will take place this year (although the date could be moved).

DW (August 5, 2021): Nicaragua charges ex-beauty queen running for election: Berenice Quezada has been disqualified from running as vice president in the upcoming vote. She is the eighth candidate to be arrested since May.

Editorial Board, Washington Post (August 5, 2021): Opinion: Democracy is under attack in Nicaragua

Chile holds presidential and legislative elections in November, following presidential primaries on July 18 that produced surprise results ). These elections follow the May 2021 local elections, and importantly, elections to the Constitutional Assembly. Incumbent president Sebastian Pinera, from the center-right Chile Vamos coalition, is not running for another term. He currently has low approval ratings. Moreover, the conservatives failed to secure even one third of the Constitutional Assembly.

Regina Garcia Cano and Juan Pablo Arraez, AP (August 5, 2021): On the bus or off, Venezuela journalists try to deliver news

Marcia Reverdosa and Juliana Koch, CNN (August 6, 2021): Bolsonaro is sowing doubt in Brazil’s electoral system. His claims could endanger his own candidacy.

Armando Chaguaceda and Coco Fusco, New York Times (August 7, 2021): Cubans Want Much More Than an End to the U.S. Embargo

Jonathan Custodio, Politico (August 5, 2021): Could VPNs help Cubans access the internet under the regime’s nose? The Biden administration has said it is working on the idea.

Leland Lazarus and Evan Ellis, The Diplomat (August 3, 2021): How China Helps the Cuban Regime Stay Afloat and Shut Down Protest

Mexico held a referendum on prosecuting former presidents on August 1, although many critics have dismissed it as pointless political theatre. Turnout was less than 7 percent, meaning the results are not binding.

This follows high-stakes midterm elections, which were a key test for left-wing populist firebrand Andrés Manuel López Obrador (frequently called AMLO) ahead of the 2024 presidential election, and he largely lost – his MORENA party did not get its majority in the legislature, and although MORENA won most of the state governorships, it lost control of most areas of Mexico City. AMLO, who has been governing in an increasingly authoritarian manner, wants to transform Mexico by jettisoning the market economy, but these election results will make it harder for him to do that.

Editorial Board, Financial Times (August 4, 2021): Mexico’s dangerously selective pursuit of justice: President’s liking for shows masks a disregard for institutions and the rule of law

Simeon Tegel, Al Jazeera (August 7, 2021): A tumultuous first week in office for Peru’s new president: Pedro Castillo is facing political and economic turmoil – including calls for his impeachment – as he forms his administration.

Lucien Chauvin, Christian Science Monitor (August 6, 2021): Peru elected a leftist outsider as president. Now it asks, can he do the job?

Bolivia held regional and local elections on March 7, 2021, and some races, including four gubernatorial races, held runoffs on April 11.

The Economist (August 7, 2021): Is Evo Morales staging a comeback in Bolivia?

Brendan O’Boyle, Americas Quarterly (August 2, 2021): Despite Protests, Guatemala’s President May Be Stronger than Ever

Scott B. MacDonald, Global Americans (August 5, 2021): Governance and electoral continuity and change in the Caribbean

← Asia This Week: August 6, 2021
August 2021 Election Outlook →
By continuing to browse the site you are agreeing to our use of cookies.
Share This