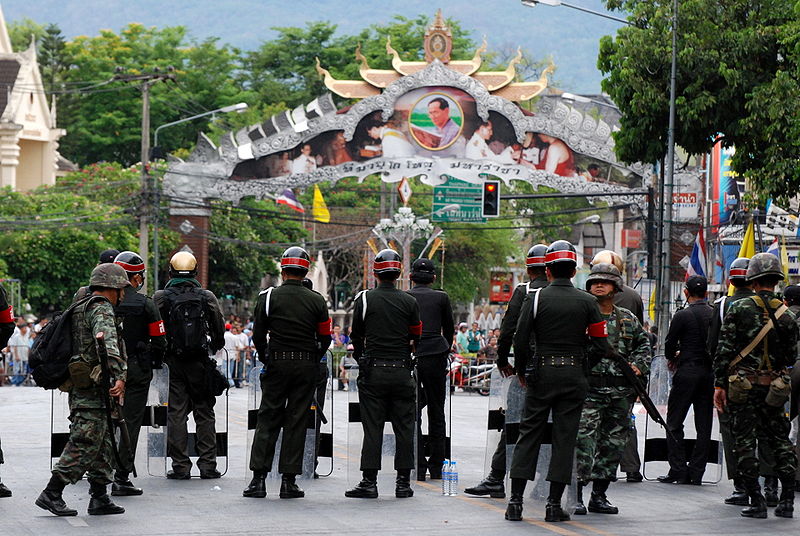 Soldiers and military police face off against protesters in Chiang Mai, Thailand in 2010. Protests are happening once again in Thailand, with demonstrators demanding unprecedented reforms as the country heads into provincial elections later this month. Photo credit: Wikimedia/Takeaway (CC BY-SA 3.0)

The Economist (December 12, 2020): Thailand’s absolutist king is on his best behaviour. But protesters do not believe he is prepared to relinquish any power

In a countrywide movement, protesters in #Thailand battle the military-backed govt seeking fresh elections, a new Constitution that protects their rights, and a radical reform of the monarchy.

Bangladesh will hold municipal elections in five stages over the course of the next few months. The country held general elections to the Jatiya Sangsad (parliament) in December 2018 amid political violence and harassment of the opposition. The Awami League (AL) has been in power since 2009 and is becoming increasingly authoritarian.

Smruti S. Pattanaik, Manohar Parrikar Institute for Defence Studies and Analyses (December 11, 2020): Hefajat-e-Islami and the Politics of Islamism in Bangladesh

7 December 1970 is a historic day. On this day, East Pakistani Awami League won a landslide victory in the Pakistan elections. It was however prevented from forming government. The events that followed led to the independence of Bangladesh one year later. @MdShahriarAlam pic.twitter.com/LB93n7VqDS

India’s states hold local elections at various times. Moreover, five states (Assam, Kerala, Puducherry, Tamil Nadu, and West Bengal) are due to hold Legislative Assembly elections in 2021. On the national stage, Prime Minister Narendra Modi’s Hindu nationalist Bharatiya Janata Party (BJP) won a massive victory in the 2019 elections to the Lok Sabha. Those elections gave BJP a second term in power as the majority party able to govern without coalition partners, in an increasingly polarized political climate. The main opposition social democratic Congress Party – India’s oldest party – has done well in a series of state elections but is reeling from the whiplash of defeat in the Lok Sabha polls.

Prashant Waikar, The Diplomat (December 8, 2020): What a City Election in Hyderabad Says About the BJP’s National Strategy

Indonesia held local and provincial elections on December 9, 2020. More than 100 million eligible voters elected governors in nine of Indonesia’s 34 provinces, plus regents in 224 districts, mayors in 37 cities and 32 provinces across Indonesia.

Indonesia's regional elections are being held today. Compared to 2015 when there were 52 ‘dynastic’ candidates, this year there are 146, according to research by @yoeskenawas https://t.co/B6ASDVYEoo