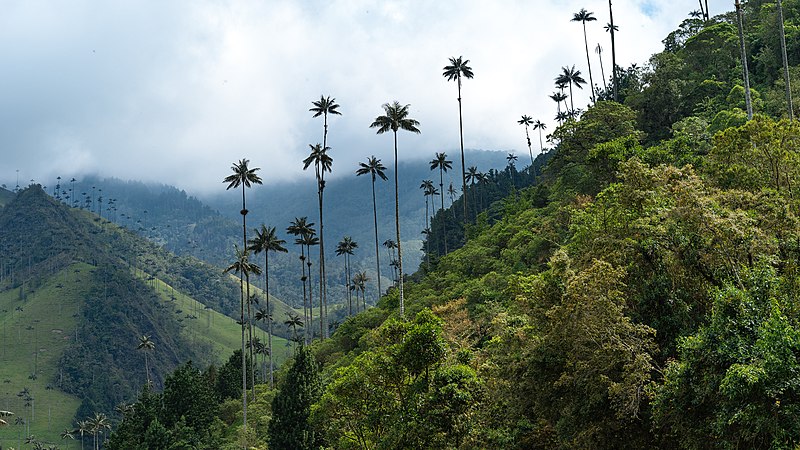 Palm trees in Valle de Corcora in Salento, Colombia. Colombia could get its first leftist president in May. Photo credit: Wikimedia/Danielcgold (CC BY-SA 4.0)

On March 27, Uruguay is holding a referendum on a wide-ranging piece of legislation called the Law of Urgent Consideration (LUC), a signature initiative of President Luis Lacalle Pou.

Lacalle Pou won the 2019 presidential election, ending 15 years of leftist government by the center-left and social democratic Frente Amplio (Broad Front) coalition. Prior to the general election, the center-right Lacalle Pou defeated a right-wing populist in his party’s primary. Corruption allegations and slow economic growth preceded the elections, leading to a vote for change.

The referendum is a key test for Lacalle Pou’s program.

General elections are next due in 2024.

The French Collectivities of St. Martin and St. Barts hold territorial council elections on March 20 and 27, 2022. St. Martin shares an island with the Dutch territory of Sint Marteen.

Mexico will hold a referendum on April 10 in which voters will decide whether to recall President Andrés Manuel López Obrador (frequently called AMLO). AMLO, a leftist firebrand, was elected in 2018. Mexican presidents serve a single, non-renewable six-year term. However, AMLO promised voters that he would give them a chance to recall him halfway through his term. Therefore, ironically, the recall referendum is being organized by AMLO’s supporters.

Mexico’s last elections were high-stakes midterm legislative elections, as well as gubernatorial elections in 15 of Mexico’s 31 states, and local elections, on June 6, 2021. In total, more than 21,000 offices were at stake – the biggest elections in Mexico’s history. AMLO’s MORENA party did not get its majority in the legislature, and although MORENA won most of the state governorships, it lost control of most areas of Mexico City.

Catalina Oquendo, El País (March 14, 2022): Francia Márquez, the Colombian electoral phenomenon: The environmental leader won more votes than the center candidate Sergio Fajardo without having held public office and with a campaign that began only three months ago

Mike Crawley, CBC News (March 23, 2022): Why an Ontario Liberal-NDP deal is bound to happen if June’s election delivers a minority

Chile holds a referendum on a new constitution in 2022. This follows last year’s presidential and legislative elections. Far-left socialist former student leader Gabriel Boric defeated Jose Antonio Kast, a far-right legislator, in the runoff. Although results of the July 18 presidential primaries seemed to indicate that voters seem to want a return to moderation, the center-right candidate from incumbent president Sebastián Pińera’s coalition did not even make the runoff. However, the legislative elections were a bit more complicated. Piñera’s Chile Podemos Más coalition will have the most seats in the Senate, and the Chamber of Deputies is split nearly evenly between right and left-leaning members. These results will potentially constrain Boric’s ability to pursue a far-left agenda. All newly-elected officials took office in March 2022.

The next presidential election is due in 2024, but some opposition figures hope it will happen early. Following Russia’s invasion of Ukraine and subsequent sanctions, U.S. officials have begun to court the Venezuelan regime.

Geoff Ramsey and David Smilde, El País (March 19, 2022): Biden’s Venezuela policy shift creates an opportunity—take advantage of it: The fundamental objective should to break the stalemate, to create dynamic opportunities that have a better chance of restoring democracy

Forantonia Singer, El País (March 16, 2022): Between Russia and the US: How Venezuela is playing both sides in the Ukraine conflict

Phil Gunson, International Crisis Group (March 16, 2022): A Twist in Caracas: Is a Venezuela-U.S. Reboot on the Cards?

Philip Pullella, Reuters (March 12, 2022): Vatican protests over expulsion of its ambassador to Nicaragua

Jamaica held general elections on September 3, 2020. The center-right Jamaica Labour Party (JLP) won a second term in a landslide, making additional gains over the main opposition People’s National Party (PNP). The next elections are due in 2025. Jamaica is a democracy rated “Free” by Freedom House. JLP and PNP have rotated terms in power.

Jamaica became independent from the United Kingdom in 1962, but the UK monarch remains the head of state. However, this could change, following a similar change in Barbados in 2021.