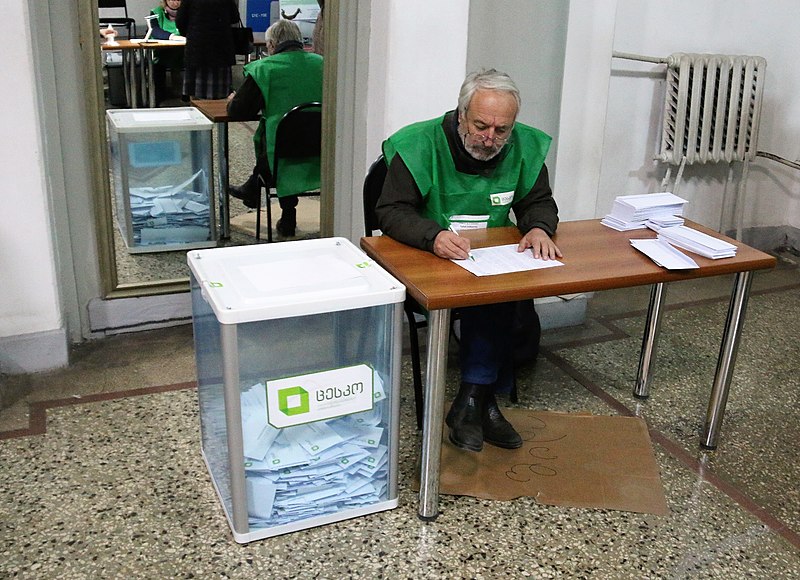 The ruling Georgian Dream claimed victory, but the opposition alleged vote fraud, and have announced a decision to boycott the runoffs and the new parliament. International observers found that the first round did not met international standards.

These elections took place in a climate of political tension, exacerbated by the COVID-19 pandemic and related economic fallout. Furthermore, the country is in the process of transitioning from a semi-presidential system to a parliamentary system.

For background: Since the nonviolent 2003 Rose Revolution, which forced the resignation of Eduard Shevardnadze, a former Soviet foreign minister who had governed Georgia since 1992, Georgia has held competitive but imperfect elections. The Rose Revolution swept Mikheil Saakashvili and his United National Movement (UNM) party into power. UNM governed until 2012, and Saakashvili and his allies transformed Georgia into a westward-looking, free market country. The UNM enacted radical reforms on state institutions and waged a war on corruption.

However, Saakashvili’s bull-in-a-china-shop approach ultimately became his undoing, and a new opposition coalition called Georgian Dream (GD), founded by eccentric oligarch Bidzina Ivanishvili,  won the 2012 parliamentary elections. GD subsequently began consolidating power. Its candidate, Giorgi Margvelashvili, won the the 2013 presidential election. After that, despite winning only 48 percent of the proportional vote, GD gained a constitutional majority in parliament during the 2016 parliamentary elections, with 115 out of 150 seats. However,  they lost it in 2019, when three MPs quit the party. Next, the party swept the 2017 local elections, winning almost all of the mayoral races. Finally, Ivanishvili’s favored candidate, Salome Zurabishvili (nominally an independent), won the disputed 2018 presidential election.

Although Ivanishvili served as prime minister for a year, he resigned in 2013, although many believe he runs the show from behind the scenes, despite holding no official office (and thus no public accountability).

The 2018 election is likely to be the last direct presidential election in Georgia as the country is transitioning to a fully parliamentary system, with the president elected indirectly and holding reduced powers. The country is also transitioning to a fully proportional electoral system – currently, it is mixed, with some MPs elected in first-past-the-post races and others elected by proportional representation. The voting system and electoral code were a topic of heated political debate.

Following GD’s parliamentary victory in 2012, a number of criminal charges were filed against Saakashvili, who subsequently left the country and became the governor of Odessa in Ukraine (although he left Ukraine after falling out in epic fashion with then-president Petro Poroshenko, but is now advising the current president, Volodymyr Zelensky). Other UNM politicians have also faced criminal charges. UNM leaders have dismissed these charges as politically motivated.

Ideologically, the UNM and European Georgia are both center-right, with links to the European People’s Party and – in the case of UMN – the International Democrat Union. Georgian Dream has ties to the Party of European Socialists and Progressive Alliance. However, the more important distinction between the parties has to do with geopolitics. Both UNM and European Georgia explicitly favor Euro-Atlantic integration and the pursuit of European Union and NATO membership. Georgian Dream, on the other hand, says it prefers a more “pragmatic” policy toward Russia. Ivanishvili and other GD leaders have deep ties to Russia.

In June 2019, a series of protests broke out over Russia, which occupies 20 percent of Georgia’s territory. The proximate cause of the protests was a speech in the Georgian parliament by Sergey Gavrilov, a Russian MP. Gavrilov sat in the speaker’s chair, which incensed many Georgians, who then took to the streets. Consequently, parliament speaker Irakli Kobakhidze resigned. However, the government mounted a brutal response to the protests that could harm the coalition in the elections.

The 2020 Parliamentary Elections in Georgia

The OSCE’s Office for Democratic Institutions and Human Rights (ODIHR), which is observing these elections, notes: “All ODIHR NAM [needs assessment mission] interlocutors noted the tense and polarized atmosphere and attributed great importance to the upcoming parliamentary elections, perceiving it as an important test for the country’s democracy and modernization reform.”

A number of observers have noted that – although all of the major parties have written platforms and published them on social media – the 2020 election campaign has been based on personality rather than ideology or specific political platforms. Indeed, Dustin Gilbreath, and Koba Turmanidze found, after analyzing polling data, that Georgians largely agree on substantive policy issues, but are divided over political personalities.

In that vein, in a controversial move, the UNM decided to nominate none other than Saakashvili as its candidate for prime minister. Given Saakashvili’s status as one of the country’s most polarizing figures, many see this as a risky move.

Nonetheless, the International Republican Institute, an American NGO, notes: “Although the 2020 parliamentary elections will occur amidst a rare moment in modern world history — during a global pandemic — they nevertheless present an opportunity for Georgia to road test the reforms that could see an increase in political and gender diversity in parliament, issue-based political negotiation and the possibility of a new coalition government after decades of single-party domination.”

Post-Election Protests and Boycott of New Parliament by the Opposition

International observers noted significant flaws in the elections, and observed that there were issues with public confidence in the polls.

Georgia is a geopolitical hotspot. In 2008, Russia invaded Georgia, and continues to occupy about a fifth of Georgia’s territory. Nevertheless, the vast majority of Georgians support a Euro-Atlantic course for their country, rather than capitulation to Moscow.

Furthermore, Georgia borders both Armenia and Azerbaijan, where the previously frozen conflict in Nagorno-Karabakh has reignited. Zaal Anjaparidze at the Jamestown Foundation notes: “The Armenian-Azerbaijani fighting has been a rare occasion when the ruling Georgian Dream (GD) and the major opposition parties actually agree on what Georgia’s stance should be—neutrality and seeking a swift de-escalation of the conflict.”

Maradia Tsaava, JAMnews (November 15, 2020): Georgian Dream vs. the United Opposition – Georgian voters talk about their choices in the elections

RFE/RL (November 14, 2020): Thousands Take To The Streets In Tbilisi To Demand Repeat Elections

← Iran Presidential and Local Elections: June 18, 2021
Kyrgyzstan Local Elections: April 11, 2021 and Parliamentary Elections Re-Run: By June 2021 (due) →
By continuing to browse the site you are agreeing to our use of cookies.
Share This