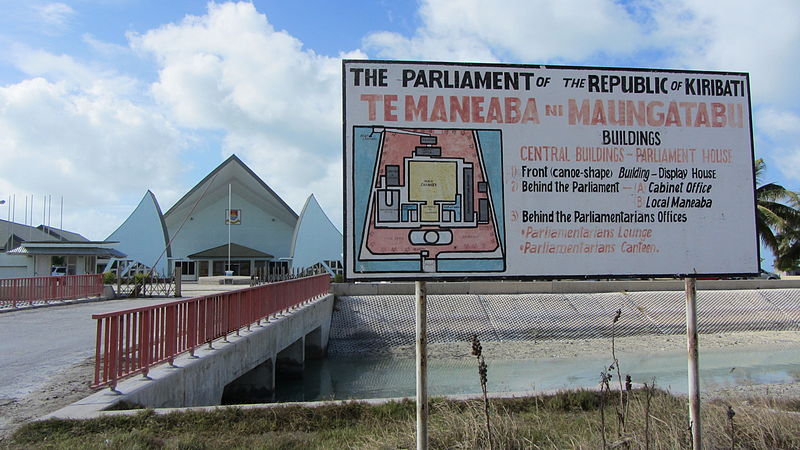 Kiribati will hold a presidential election on June 22, 2020 following parliamentary elections this past April. Parliament chooses a group candidates, and and then a nationwide popular vote decides the winner. This year, incumbent Taneti Maamau will face off against his former ally Banuera Berina.

The Republic of Kiribati, consisting of 33 islands spread out over more than a million miles of Pacific ocean, is a free democracy with regular, credible elections.

In the April 2020 parliamentary elections, the government – led by the Boutokan te Koaua Party (BTK), which means Pillars of Truth – lost its majority because of a controversial decision it made last year to switch diplomatic recognition from Taiwan to China. Maamau pushed the decision, which caused his split with Berina, who opposed the switch and in fact even tried to pass a no-confidence motion to oust Maamau. Tebuai Uaai, who was parliament speaker at the time, thwarted the attempt. Subsequently, Uaai lost his speakership to Tangariki Reete, who became Kiribati’s first female parliament speaker.

From 2003 to 2019, Kiribati was one of the handful of countries that recognized Taiwan. Since Tsai Ing-wen, who advocates for Taiwanese independence, became Taiwan’s president in 2016, China has made a big push to isolate Taiwan diplomatically, and has used financial incentives to convince at least seven countries to pull recognition from Taiwan. In that vein, Kiribati’s decision to switch diplomatic recognition from Taiwan to the PRC came less than a week after another Pacific nation, the Solomon Islands, made a similar move, and left Taiwan with diplomatic recognition from only 15 countries. (The latest push from China came shortly before Taiwan’s January 2020 elections. It was likely calculated to harm Tsai’s re-election prospects, but it failed – Tsai won re-election decisively, and her party outperformed polls and retained control of the legislature). Still, China is continuing to use sticks and carrots to pick off Taiwan’s remaining recognizers.

Concurrently, China has been working to expand its economic and military influence in the region. It has been pumping investment into the Pacific nations through the Belt and Road Initiative, raising concerns about debt-trap diplomacy. The current economic and diplomatic efforts could be part of a larger plan to establish a military base in the region, challenging the United States and Australia (although Australian Prime Minister Scott Morrison has made some moves in response, such as establishing a $1.5 billion infrastructure fund for the region). While Vanuatu is often cited as the most likely site of a base, Kiribati previously hosted a Chinese satellite tracking facility.

Christopher Pala, Foreign Policy (June 19, 2020): China Could Be in Reach of Hawaii After Monday’s Election in Kiribati

Christopher Pala, The Guardian (April 23, 2020): Pro-China Kiribati president loses majority over switch from Taiwan Party that switched recognition from Taiwan to China last year lost majority in elections this week over handling of the move

← Tajikistan Presidential Election: November 2020 (due)
Guyana General Elections: March 2, 2020 →
By continuing to browse the site you are agreeing to our use of cookies.
Share This