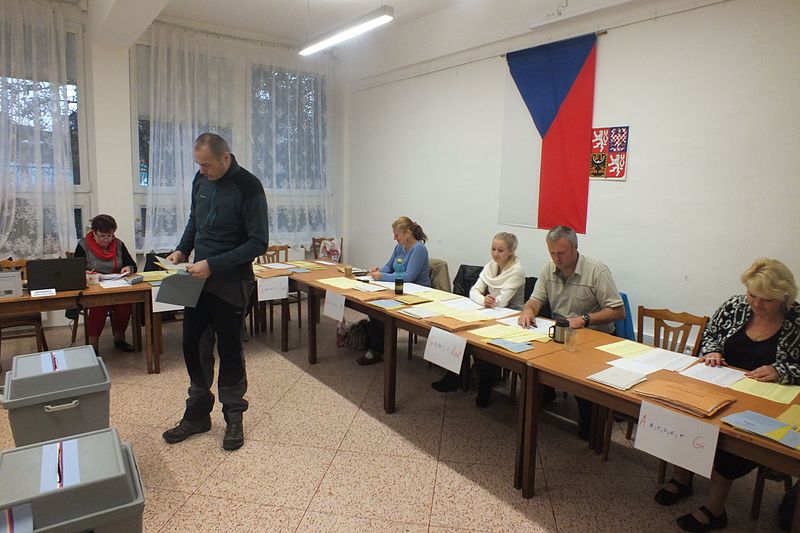 Voters in Olomouc, in the country’s east, in the 2016 regional and Senate elections in the Czech Republic. Photo credit: Wikimedia/Jan Kameníček (CC BY-SA 4.0)

The 1989 Velvet Revolution ended 41 years of communist rule in Czechoslovakia, and the country held its first democratic elections in 1990. Subsequently, in 1993, Czechoslovakia split into Slovakia and the Czech Republic, in what has been called the “Velvet Divorce.”

The anti-Communist dissident playwright Vaclav Havel, who died in 2011, became the country’s first president following the Velvet Revolution, and is widely considered a hero, not just in the Czech Republic, but among democracy activists worldwide. As Carl Gershman, president of the National Endowment for Democracy, pointed out: “More so than any of the prominent figures from the period of anti-communist dissent, Havel used his position, voice and moral authority to advance present-day struggles for freedom.”

The Current Political Landscape in the Czech Republic

The current prime minister, controversial billionaire Andrej Babiš, came to power following the 2017 parliamentary elections. His populist ANO party won a plurality, but not majority, of seats, and he has had a turbulent tenure in office. For example, it was not until July 2018 that he was able to form a governing coalition with the Social Democrats (ČSSD).

In the 2018 presidential election, anti-immigrant populist Miloš Zeman won a second term for president. Zeman has been a member of various parties, and ultimately founded his own party, Party of Civic Rights – Zeman’s people (SPOZ), in 2009. SPOZ is a left-wing populist party, in contrast to ANO’s right-wing populist ideology. However, both parties are more centered around the personalities of their leaders rather than ideology.

Both Babiš and Zeman have sought to move the Czech Republic closer to Russia and China, in contrast to previous governments, who have emphasized closer Euro-Atlantic integration. Zeman has made statements in support of Russia’s invasion of Ukraine, in addition to having close ties to Russian intelligence personnel.

The country is a parliamentary democracy; as such, the prime minister holds most executive power, while the president is the head of state. However, Zeman has been accused of overstepping his constitutional role, with Babiš being insufficiently powerful to stop him.

The 2021 Parliamentary Elections in the Czech Republic

Several opposition coalitions and parties have formed to challenge ANO. One is the center-right Spolu (Togehter0, consisting of the Civic Democratic Party (ODS), KDU-ČSL (Christian Democrats), and TOP 09. Another is the centrist Pirates and the Mayors and Independents (STAN), which campaigns against corruption. Moreover, a new liberal party called LidePRO has formed and plans to engage people had previously not voted, as well as attempt to flip supporters of ANO.

ANO’s support has hemorrhaged amid the COVID-19 pandemic. In that vein, the opposition did incredibly well in the October 2020 Senate elections. Therefore, ANO could be in trouble heading into the parliamentary elections.

The Czech Republic joined NATO in 1999 and the European Union (EU) in 2004. While a substantial number of Czechs have eurosceptic view, a Pew Research Foundation survey found that more than half do hold a favorable view of the EU. Moreover, while some smaller parties such as the Communists call for the country to leave NATO, much of the political class strongly supports NATO.

However, the debate over China looms large in Czech political circles at the moment. Both Babiš and Zeman have worked to build stronger links with China (and also Russia). Conversely, various political parties across the political spectrum have built links with Taiwan. For example, Prague mayor Zdeněk Hřib established a sister city deal with Taipei. Additionally, Senate president Milos Vystrcil from ODS led an 80-member delegation to Taiwan to deepen ties, in defiance of Babiš and Zeman.

← Libya Presidential and Parliamentary Elections: Postponed (will possibly take place in June 2022)
Switzerland →
By continuing to browse the site you are agreeing to our use of cookies.
Share This