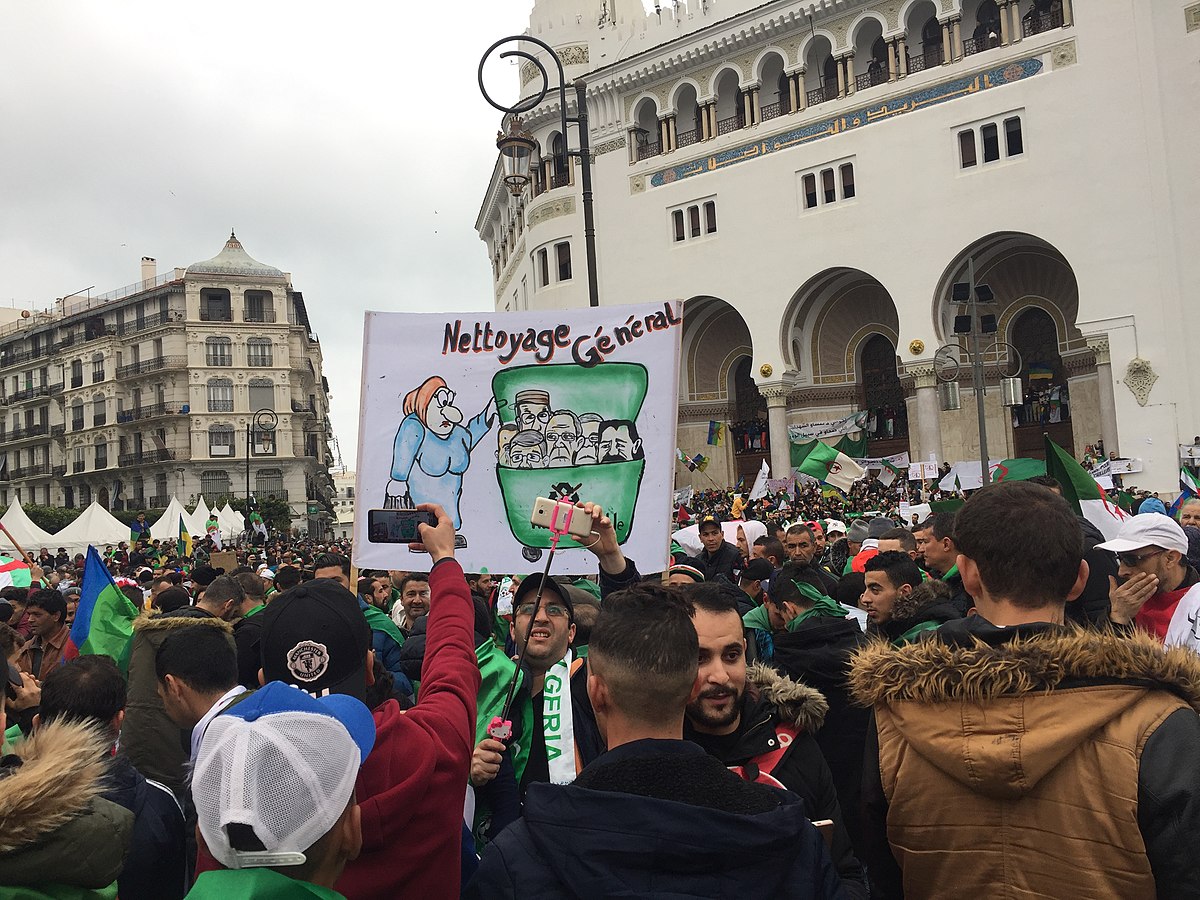 Protesters in Algeria’s capital Algiers on March 22, 2019 – the fifth Friday of protests that would continue for over a year. Demonstrators called for reforms, including democratic elections in Algeria. Photo credit: Wikimedia/Anistmz (CC BY-SA 4.0)

These elections follow more than two years of protests by the Hirak protest movement, in which Algerians protested weekly throughout the country for over a year (stopping only due to the COVID-19 pandemic). Protesters called for, among other things, democratic elections in Algeria. However, the government’s election plan has not actually satisfied the Hirak, who continue to take to the streets and have decided to boycott the elections. The absence of the Hirak, who are mostly secular, from the elections has paved the way for Islamist parties to become the main opposition.

Furthermore, COVID-19 continues to create challenges, above all a troubled economy.

The Controversial 2019 Presidential Election in Algeria

A bit of background: Algerian politics have for a long time been dominated by “Le Pouvoir,” a small group of elite from the military and the ruling National Liberation Front (FLN) party.

In the 2019 presidential election, incumbent Abdelaziz Bouteflika, aged 82 and unable to walk or talk, was nevertheless going to run for a fifth term. However, tens of thousands of Algerians protested in the streets for two months. Bouteflika subsequently resigned, under pressure from the military, and did not run in the election, which ultimately took place in December 2019.

All five 2019 presidential candidates had ties to the Bouteflika regime. Ultimately, former prime minister Abdelmadjid Tebboune won with nearly 60 percent of the vote. However, turnout was low, and protesters said the vote was neither free nor fair. Moreover, the army remains the real center of power. Although the government has prosecuted some members of the Bouteflika regime for corruption, the power dynamic remains largely unchanged.

Over a Year of Protests

Consequently, protests continued until March 2020, when the government demanded they stop, invoking COVID-19. Moreover, activists continue to face arrest and harassment by the authorities.

On November 1, 2020, Algerians passed a new constitution enshrining presidential term limits and increase the powers of the parliament and the prime minister. The government touted it as being the answer to the demands of Hirak movement.

Abdelkader Cheref, The New Arab (May 26, 2021): Algeria’s Hirak movement returns in force ahead of elections

Al Jazeera (May 22, 2021): Hundreds arrested as Algeria cracks down on protest movement

Lisa Schlein, Voice of America (May 12, 2021): Freedom of Speech, Assembly Under Attack in Algeria, UN Warns

M. Tahir Kilavuz and Sharan Grewal, Brookings Institution (February 26, 2020): Algerians have been protesting for a year. Here’s what you need to know

← Brazil Local Elections: November 15, 2020 (Second Round: November 29, 2020)
Morocco Legislative, Provincial, and Local Elections: September 8, 2021 →
By continuing to browse the site you are agreeing to our use of cookies.
Share This