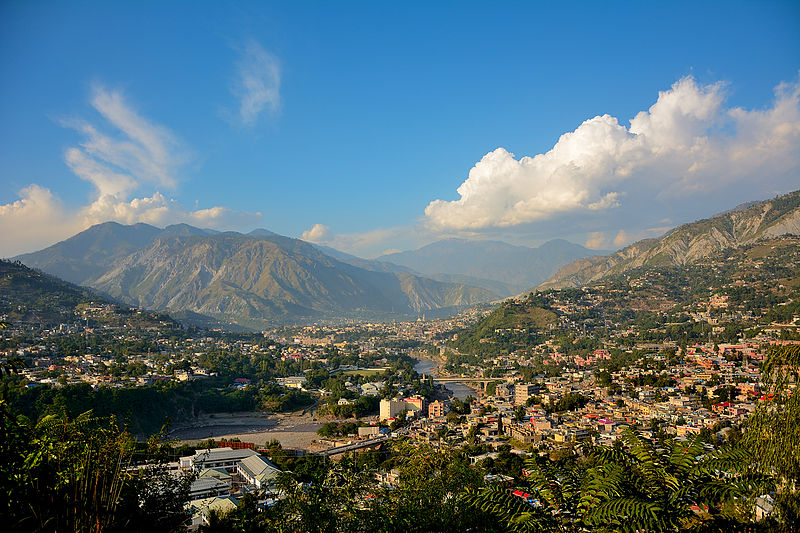 Muzaffarabad, capital of Azad Jammu and Kashmir. The city is located in a valley at the confluence of the Neelam and Jhelum rivers. Photo credit: Photo credit: Wikimedia/Obaid747 (CC BY-SA 3.0)

Pakistan’s administrative territory of Gilgit-Baltistan (the Pakistan-controlled part of Kashmir) will hold elections for its Legislative Assembly on November 15, 2020, following delays. The current assembly members’ terms ended in June, and political parties have opposed the delay. In addition, Pakistan is due to have indirect Senate elections in March.

Pakistan has various administrative units that elect their own legislatures. The four provinces (Balochistan, Khyber Pakhtunkhwa, Punjab, and Sindh) elect their legislatures at the same time as general elections. Gilgit-Baltistan and the territory of Azad Jammu and Kashmir (often simply called Azad Kashmir or AJK) hold their elections at other times. Gilgit-Baltistan held elections in November 2020

Azad Kashmir and Gilgit-Baltistan are administrative territories whose status has been somewhat in flux because all of the ongoing dispute between Pakistan and India over Kashmir. In short, their statuses as autonomous administrative territories – as opposed to provinces fully incorporated into Pakistan’s political structure – has the potential to keep tensions with India on a low boil.

The downside to the arrangement is a democracy deficit. Both only recently got their own legislatures. India opposed the legislative assemblies and routinely objects vociferously to the holding of elections in Pakistani Kashmir (Pakistan responded to recent criticism by pointing out that India holds elections in the India-controlled parts of Kashmir). Moreover, political freedom is restricted.

Moreover, while the people are now able to elect local representatives, the territories still aren’t represented in Pakistan’s federal parliament in Islamabad, and the national government maintains control over key government functions. A 2019 Pakistani Supreme Court ruling provided for representation in parliament subject to a resolution of the Kashmir dispute – which does not look likely to be resolved anytime soon.

In October 2020, 11 of Pakistan’s opposition parties, including the PML and the PPP, united to form the Pakistan Democratic Movement (PDM), ahead of indirect Senate elections in March. In those elections, PTI failed to win a majority, a major political hit for Imra nKhan.

The entire Kashmir region, which borders Afghanistan and China’s Xinjiang Province, is a geopolitical hotspot. Both India and Pakistan claim the entirety of Kashmir, and it has sparked several wars. The region remains heavily militarized.

The India-controlled part of Kashmir has been in crisis since August 2019. In a surprise move, the Modi government made a unilateral decision to strip the Indian-controlled part of Kashmir of its autonomy. For seventy years, the Indian-controlled part – established as the state of Jammu and Kashmir and India’s only Muslim-majority state – enjoyed a high degree of autonomy, but Modi announced that the state would be downgraded into two union territories, effectively centralizing control. The area remains on lockdown a year later. The situation has unsurprisingly exacerbated tensions between India and Pakistan.

Meanwhile, China has been ramping up its presence in the region. The China-Pakistan Economic Corridor (CPEC), a centerpiece of China’s Belt and Road Initiative, runs through Gilgit-Baltistan. Some analysts argue that making Gilgit-Baltistan a province would benefit China.

The Economist (November 24, 2020): Flare-ups between India and Pakistan in Kashmir are getting fiercer

Jayant Sriram, The Hindu (November 24, 2020): Pakistan’s move in Gilgit-Baltistan and what it means for India | The Hindu In Focus podcast

Ian Bremmer, Time (October 26, 2020): What Happens Next in Pakistan Now That the Opposition Has Come Together

Ravi Agrawal, Foreign Policy (October 22, 2020): Why Pakistanis Are Daring to Criticize Their Military

Umair Jamal, The Diplomat (September 29, 2020): Will Pakistan’s Military Hold a Free and Fair Election in Gilgit-Baltistan?

Priyanjoli Ghosh, The Geopolitics (May 12, 2020): Gilgit-Baltistan Elections: A Reason Behind Continuous Friction in the Status of Kashmir

← Kuwait Parliamentary Elections: December 5, 2020
North Macedonia Local Elections: October 2021 (due) →
By continuing to browse the site you are agreeing to our use of cookies.
Share This