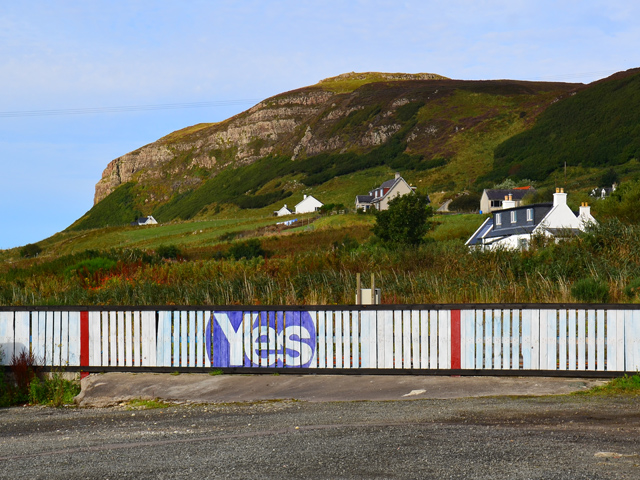 Graffiti supporting Scottish independence on Scotland’s Isle of Skye ahead of the 2014 referendum. Scotland may be headed for yet another independence referendum following next year’s elections. Photo credit: Wikimedia/John Allan (CC BY-SA 2.0)

Bosnia and Herzegovina (BiH) held local elections on November 15, 2020. Mostar, a city divided between Bosniaks and Croats in Croat-dominated Herzegovina, will hold municipal elections for the first time ever since 2008. In fact, Mostar has had no city council for the last seven years, which has been a disaster for citizens because basic municipal services aren’t being provided. The elections are taking place in the context of gridlock and ethno-nationalism. More

Despite a low turnout, opposition parties have made incursions in some of the key cities and municipalities across the country, preliminary results from Bosnia and Herzegovina’s local elections show.

Is a shift on the country's political horizon?https://t.co/O0LxVJRUlB

Netherlands is scheduled to hold parliamentary elections on March 17, 2020. The current government is a coalition of four liberal and center-right parties. The biggest is VVD, whose leader, Mark Rutte, is heading his third government as prime minister. While Rutte has been under fire from other political parties, including members of his own coalition, he enjoys high approval ratings from Dutch voters, including for his handling of the COVID-19 pandemic.

Seven municipalities in Groningen and Noord-Brabant held local elections this week due to boundary changes. Turnout was normal, despite COVID-19, seen as a promising sign ahead of the March 2021 parliamentary elections. More

France Regional Elections: March 2021 (due – delay possible due to COVID-19)

France is due to hold regional elections in March 2021, but the prime minister has proposed a three-month delay due to COVID-19. Voters will elect regional councils throughout France and France’s overseas departments.

The Economist (November 17, 2020): Brexit and covid-19 show up the disunited kingdom

Cyprus is due to hold parliamentary elections on May 23, 2021. Following independence from the United Kingdom in 1960, but tensions between the Greek and Turkish-speaking communities ramped up, with the UN consequently establishing a buffer zone in 1964 between the Greek-speaking south and T1urkish-speaking north. In 1974, the country became divided in practice following a coup and a Turkish military intervention. Although the Republic of Cyprus is the only internationally-recognized government on the island, in reality, it only controls the south. The self-proclaimed Turkish Republic of Northern Cyprus (TRNC), which only Turkey recognizes, controls the north.